Given the inevitable human-animal-environment interface, countries across the world are at risk of zoonotic diseases. In the past, the world has witnessed large-scale public health events including severe respiratory diseases such as Spanish flu (1918), Swine flu (2009), Severe Acute Respiratory Syndrome (2002) and Middle East Respiratory Syndrome (2012). The ongoing novel coronavirus outbreak has now been declared a public health emergency of international concern due to its high transmissibility and increasing spread across countries.

In 2013, Nigeria developed its first national Pandemic Influenza Preparedness and Response Plan. In view of the current epidemiology and scope of global influenza outbreaks, the Nigeria Centre for Disease Control (NCDC) is working with stakeholders to review the country’s pandemic influenza plan.

In line with this, the Influenza Technical Working Group conducted the 2nd Pandemic Influenza Preparedness (PIP) stakeholders’ workshop from 28th - 29th January 2020. The objectives of the workshop were to:

The workshop was attended by the representatives from relevant ministries, departments and agencies, as well as multilateral and bilateral organisations.

At the end of the workshop, the objectives were achieved including the review of all the phases (Prevent, Prepare, Response and Recover) of the PIP plan.

Upon completion, the reviewed Pandemic Influenza Preparedness and Response Plan will guide and provide a high level, unifying, cross-sectoral, strategic preparedness and response framework for pandemic influenza in Nigeria.

• No health care worker was infected

• Confirmed cases are being treated at the designated treatment centres 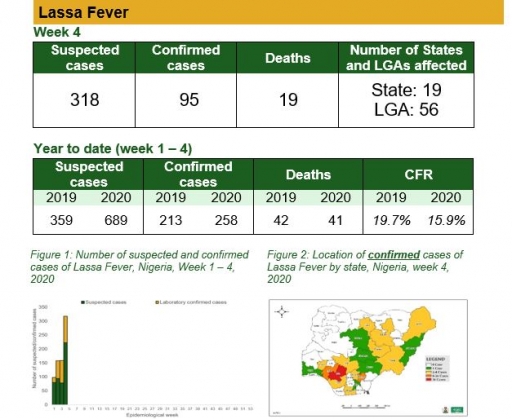 There were 14 suspected cases of Cerebrospinal Meningitis (CSM) reported from nine LGAs in six states (Borno – 1, Benue – 4, Ebonyi – 2, Edo – 2, Katsina – 3 & Kebbi – 2). None was laboratory confirmed and no death was recorded

• Follow up with State Epidemiologists of Kebbi, Bayelsa, Ebonyi, and Ogun states for updates on recent reported cases 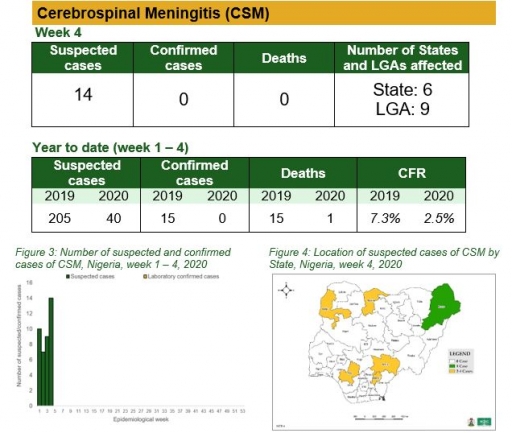 • There were 32 suspected cases of yellow fever (YF) reported from 28 LGAs in 14 states. None was laboratory confirmed and no death was recorded 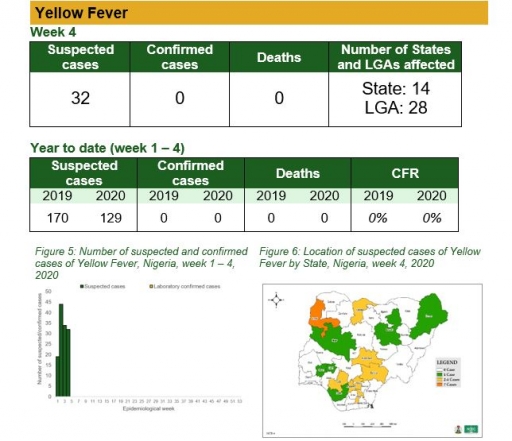 • There were 74 suspected cases of cholera reported from four LGAs in three states (Bayelsa – 3, Ebonyi – 69 & Kebbi – 2). None was laboratory confirmed and four deaths were recorded

• Development of the 2020 cholera preparedness and response plan ongoing

• Follow up with State Epidemiologists of Kebbi, Bayelsa, Ebonyi, and Ogun states for updates on recent reported cases 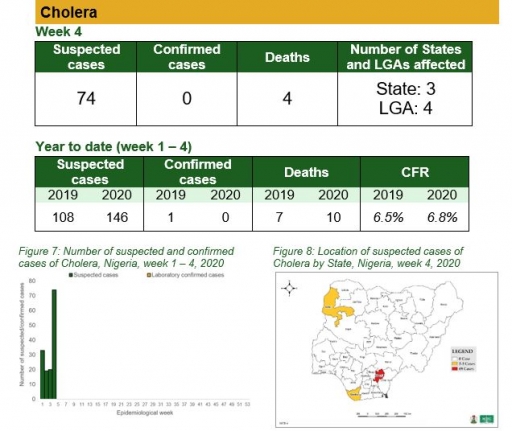 • There were 591 suspected cases of measles reported from 171 LGAs in 29 states. None was laboratory confirmed and two deaths were recorded

• Conduct a risk assessment of outbreaks in affected states 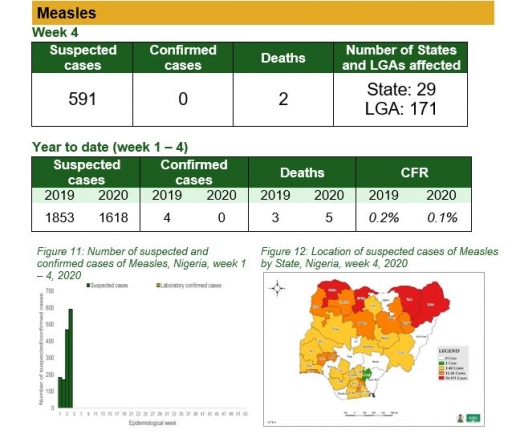 • There were no suspected cases of monkeypox reported this week

• National Monkeypox TWG is monitoring activities in all states 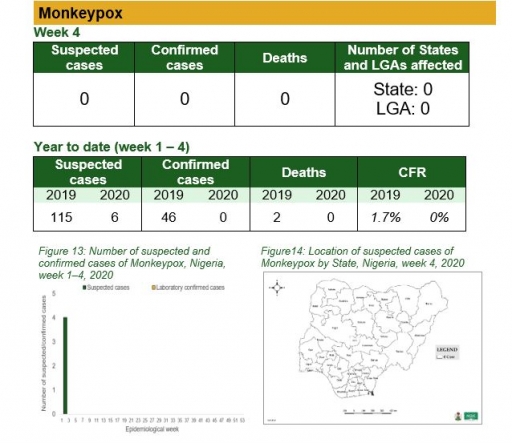 • There were 90 suspected cases of AFP reported from 79 LGAs in 27 states and FCT. None was laboratory confirmed and no death was recorded 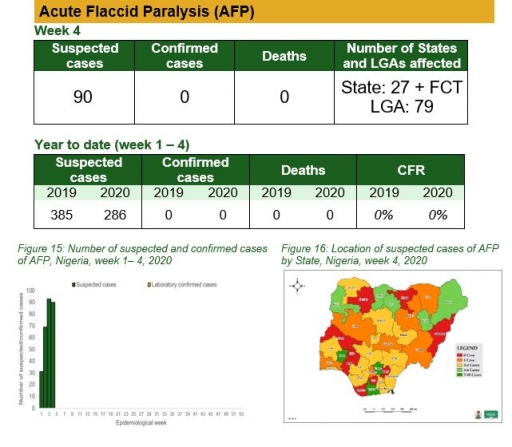 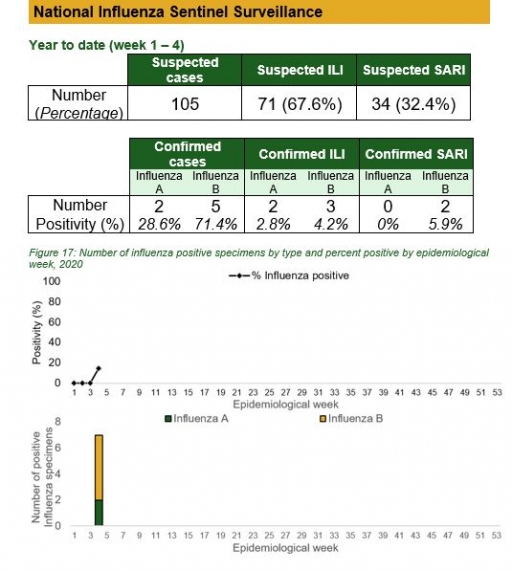 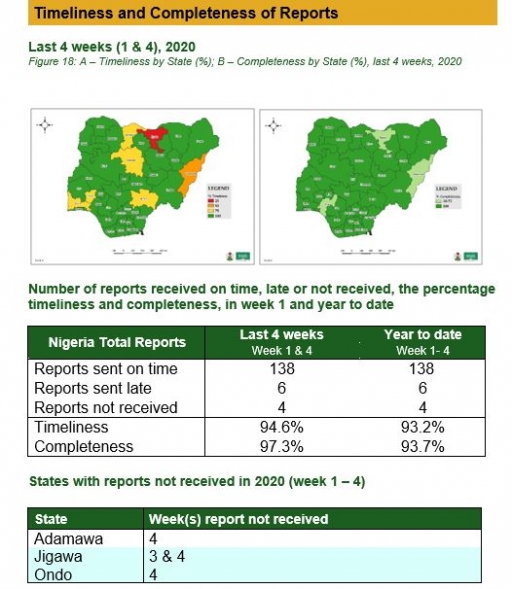 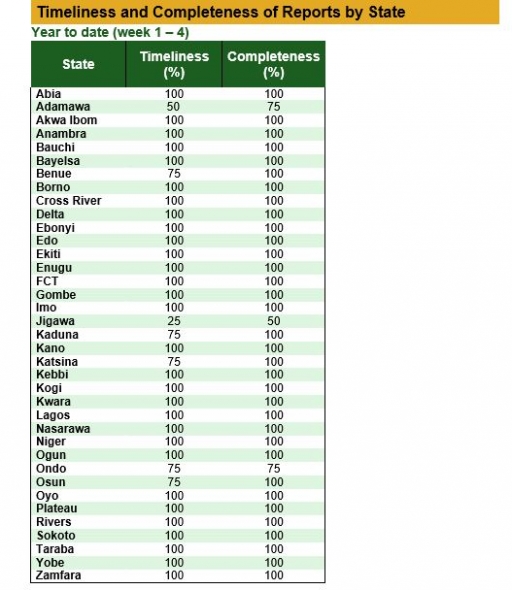