In 2017, the Nigeria Centre for Disease Control in collaboration with various Ministries, Departments and Agencies (MDAs), as well as relevant development partners carried out a Joint External Evaluation (JEE) of Nigeria’s International Health Regulations (IHR 2005) capacities.

The 2017 JEE highlighted critical gaps in Nigeria’s health security system. Out of that, a National Action Plan for Health Security (NAPHS) was developed and launched in 2018. Since the 2017 JEE, NCDC as the IHR National Focal Point, as well as other MDAs have invested resources in closing the gaps identified. Towards this, Nigeria intends to hold a mid-term JEE to answer the critical question on “What progress has been made across the 19 IHR technical areas in Nigeria since 2017?” The mid-term JEE will be carried out from November 18 - 22 2019, supported by the World Health Organization.

Since the first JEE in Nigeria in 2017, changes have been made including the introduction of a JEE 2.0 tool. To ensure technical leads are better prepared for the process, the US Centers for Disease Control (US-CDC) and World Health Oragnisation (WHO) supported NCDC to train officers on the new JEE 2.0 tool. In attendance were representatives from the Federal Ministry of Health, Ministry of Agriculture and Rural Development, Ministry of Finance, Office of the National Security Adviser etc. The workshop provided a unique opportunity to introduce the new tool as well as brainstorm on strategies to ensure a successful mid-term JEE.

A major outcome from the workshop was that the cross-sectoral technical leads have improved understanding and capacity to provide support in the following desired mid-term JEE outputs:

2. Document a narrative describing major accomplishments and challenges since the JEE was conducted

4. Map partner areas of support to selected benchmarks, with identification of gap areas that should be prioritised for resource mobilization

As the national focal point for IHR implementation in Nigeria, NCDC remains committed to fulfilling its obligations in ensuring national health security. This is in collaboration with other MDAs in Nigeria and partners. It is hoped that the forth-coming mid-term JEE review will provide another opportunity for diverse stakeholders to come together to review progress made and ultimately develop a one-year operational plan for a seamless implementation of NAPHS.

Ongoing Incidents are defined as confirmed cases where a national EOC or equivalent has been activated.

Other incidents are those confirmed cases for which EOC is not activated.

5. Information for sentinel influenza was retrieved from the laboratory. 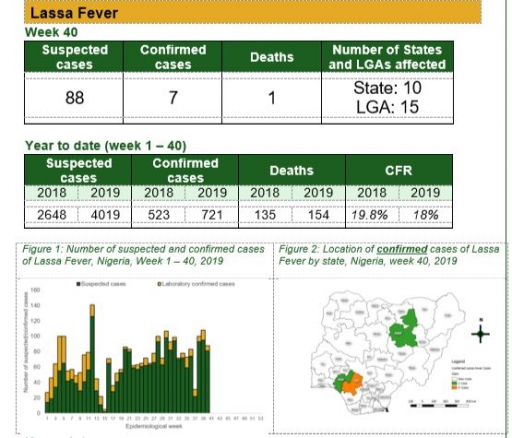 There were 15 suspected cases of Cerebrospinal Meningitis (CSM) reported from eight LGAs in six states (Kano – 1, Katsina – 8, Kebbi – 1, Oyo – 3, Sokoto – 1, & Yobe – 1). None was laboratory confirmed and no death was recorded

• Establish a mechanism for getting weekly feedback from states. 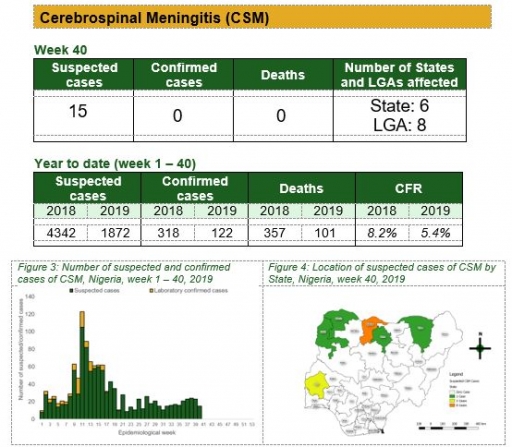 There were 126 suspected cases of Yellow Fever (YF) reported from 75 LGAs in 19 states. None was laboratory confirmed and one death was recorded 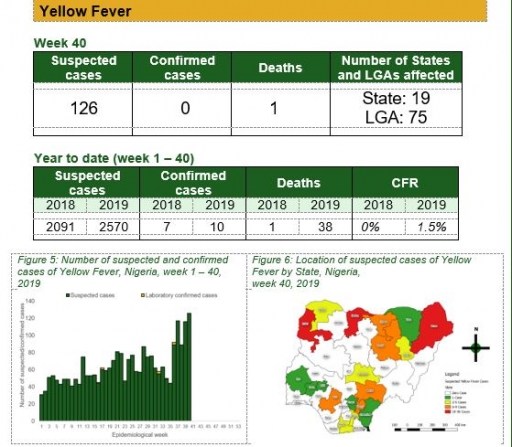 There were 24 suspected cases of Cholera reported from two LGAs in two states (Adamawa – 1 & Borno – 23). None was laboratory confirmed and no death was recorded

• Follow up with states with active outbreak and monitor non-reporting states. 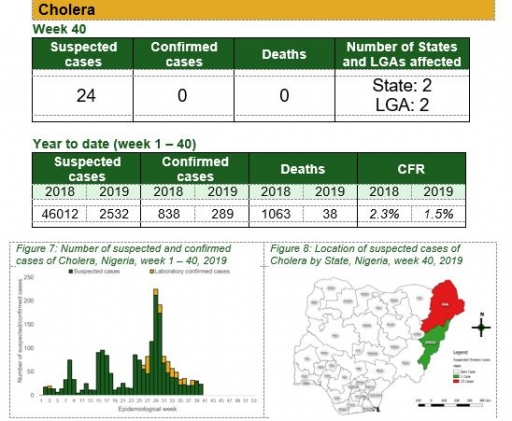 • None was laboratory confirmed and no death was recorded

• Follow up with Katsina state on the next line of action 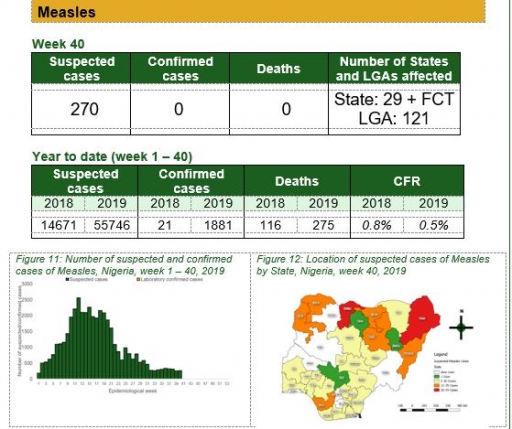 • None was laboratory confirmed and no death was recorded

• Follow up to ensure all contacts are line listed and monitored for 21 days. 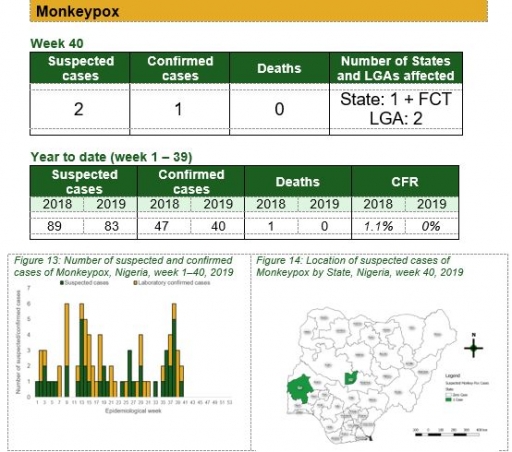 • There were 110 suspected cases of AFP reported from 91 LGAs in 29 states and FCT. None was laboratory confirmed and no death was recorded 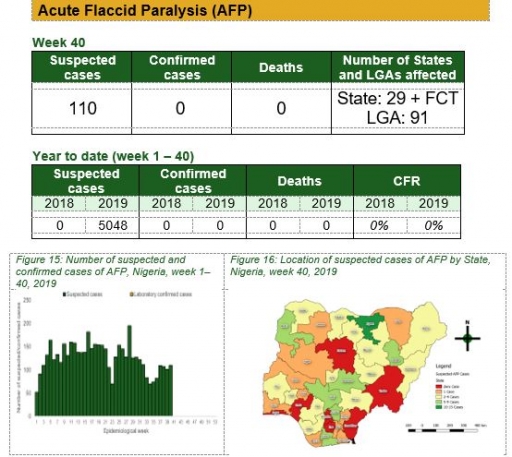 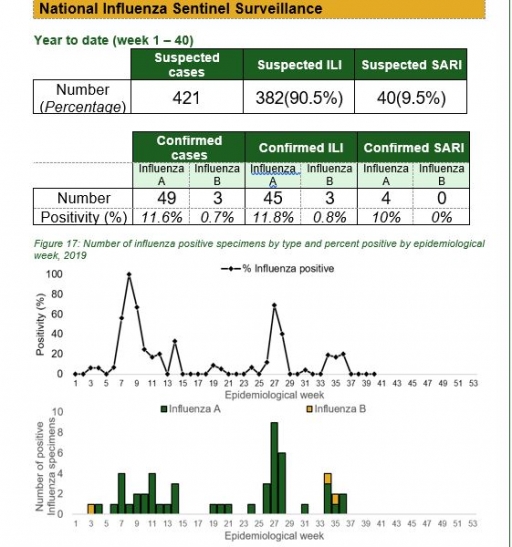 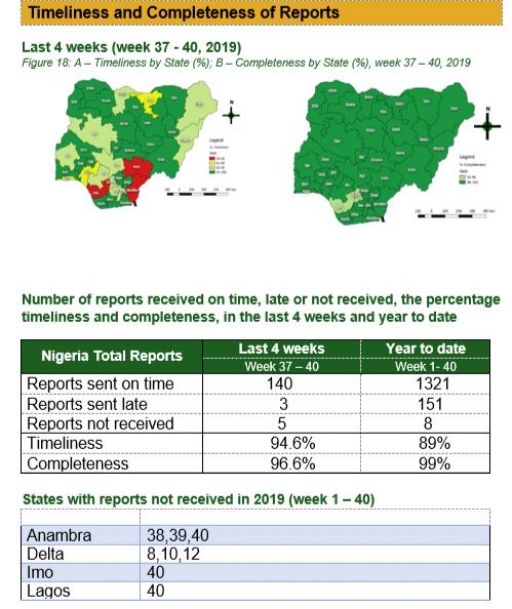 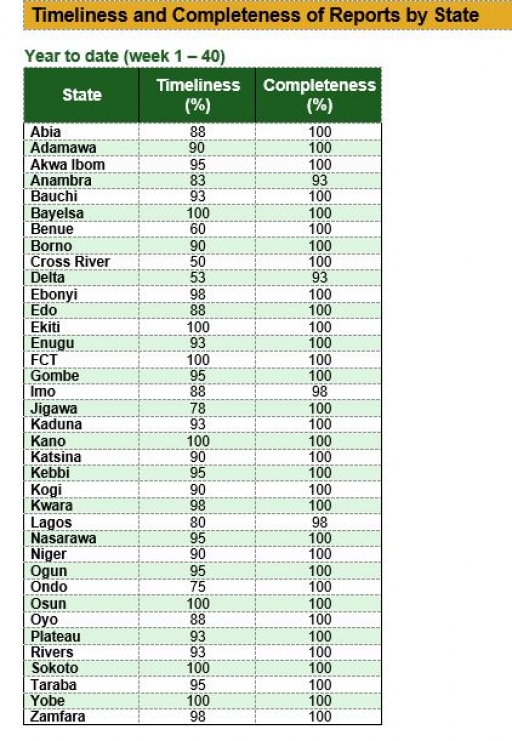