The Nigeria Centre for Disease Control (NCDC) has continued to provide support (on-site and off-site) to the affected states. A team has been dispatched by the NCDC to provide support to Borno State. This was very important given the peculiar situation in the State, which has further created challenges with disease notification, reporting and surveillance.

Case Notification in the face of insurgency: The Borno Story

The first confirmed case of Lassa fever in Borno State was reported to the NCDC on the 1st of March 2017. The index case is a 32-year old woman who presented at the hospital with a 9-day history of high-grade fever and 2-day history of bleeding from the nose and mouth.

She had a history suggestive of being exposed to rats and also poor storage of foodstuffs (uncovered foodstuff). Onset of illness was on the 17th of February 2017 and patient first visited a chemist and then a traditional healer. She later presented at a health facility on the 20th of February 2017 where the Lassa fever was suspected. She was put in an isolation unit and had laboratory investigations carried out results showed she was positive for Lassa fever. The affected LGA was notified on the 21st of February and notification was sent to the State, the next day (22nd of February). Contact tracing has also been instituted.

We applaud the Borno State Team for the prompt notification of this case. It is also important to highlight that the high index of suspicion among the health workers, which led to the patientâ€™s immediate isolation, played a key role in preventing further spread of the disease. We continue to encourage the general public to report immediately to a health facility if they have symptoms suggestive of Lassa fever or any VHF. We must remember that if a fever persists, it may be Lassa fever.

The CSM Outbreak in Zamfara State

The NCDC was notified of the CSM outbreak in Zamfara State on the 7th of February 2017. However, the suspected outbreak was first noticed on the 22nd of November 2016. 444 suspected cases and 45 deaths in 5 LGAs had been recorded as at the time of notification. In response to this, the NCDC has since deployed a team to Zamfara State to support the Stateâ€™s response to the outbreak.

The suspicion of CSM and its notification was very late despite the nature of the illness and the time of year, i.e the dry season when cases of CSM are predominant. Weekly surveillance reports sent by the State for many weeks did not reflect the presence of any public health event to be concerned about.

Early notification is a very critical aspect of surveillance. It shows by extension, the strengths or weaknesses of our surveillance system. The stories shared in this weekâ€™s report are bordered on the importance of early notification, which is also a means of raising awareness to all concerned while sending out messages to concerned stakeholders for any support that may be required.

It is imperative that all suspected cases of epidemic-prone diseases are notified immediately to the next level, before laboratory investigations are carried out. Notification should be done from health facility to the LGA/State/National using the case-based surveillance reporting form (IDSR 001A). Notifications can also be done through other approved channels-SMS, phone calls and chats to the appropriate authorities.

o There were 285 new cases of Acute Flaccid Paralysis (AFP) reported. None was confirmed as Polio. The last reported case of Polio in Nigeria was in August 2016. Active case search for AFP is being intensified as Nigeria has assiduously reinvigorated its efforts to eradicate Polio.

o No new suspected case of Cholera was reported.

o There were 89 suspected cases of Cerebrospinal Meningitis (CSM) reported from 22 LGAs in 10 States. Of this, two were lab confirmed and 14 deaths were recorded. Surveillance for CSM is ongoing and intensified in the States, particularly as the dry season has set in.

o There were 629 suspected cases of measles reported from 30 States including the FCT. Three (3) were laboratory confirmed and 14 deaths were recorded. 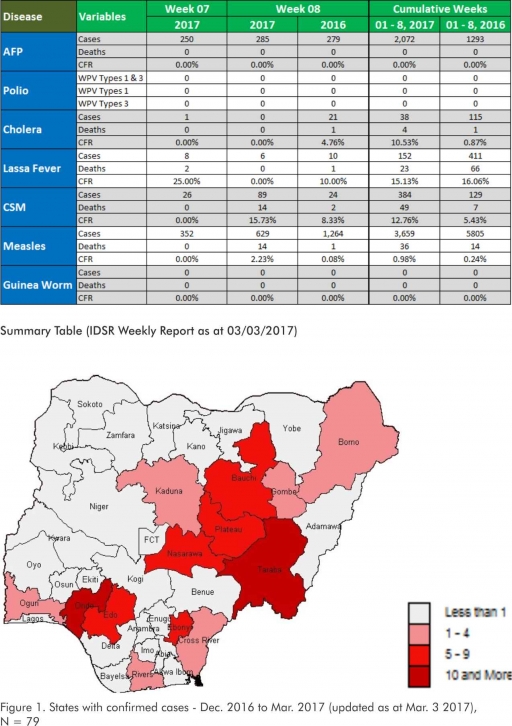 1.2. Laboratory results of the six suspected cases were three negative for Lassa fever and other VHFs while three results are pending (Bauchi â€“ 1, Plateau -1 & Taraba â€“ 1).

1.5. Investigation and active case search ongoing in affected states with coordination of all response activities by NCDC with support from partners.

1.5.5. Ongoing review of the variable for case based surveillance for VHF

1.5.6. VHF case based forms completed by affected States are being entered into the new VHF management system. This system allows for creation of a VHF database for the country.

1.5.7. Confirmed cases are being treated at identified treatment/isolation centers across the states with Ribavirin and necessary supportive management also instituted

1.5.10. States are enjoined to intensify surveillance 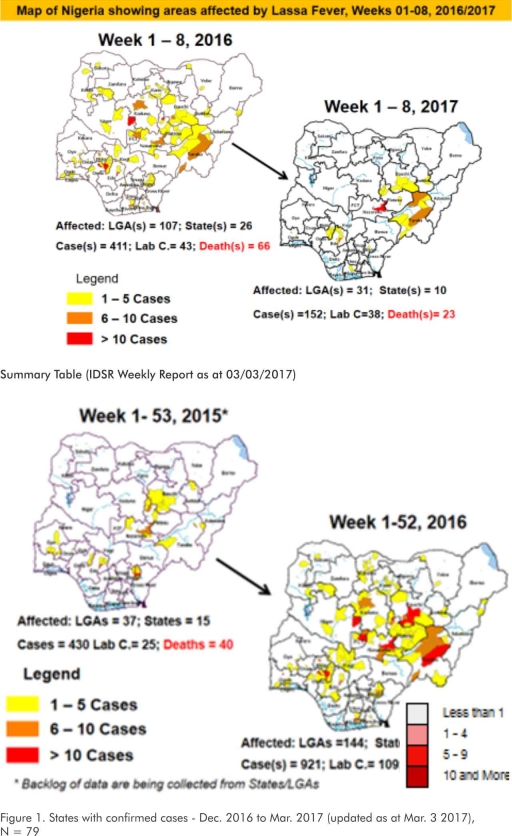 2.4. Response measure includes immunization for all vaccine-preventable diseases in some selected/ affected wards/LGAs during SIAs with case management. 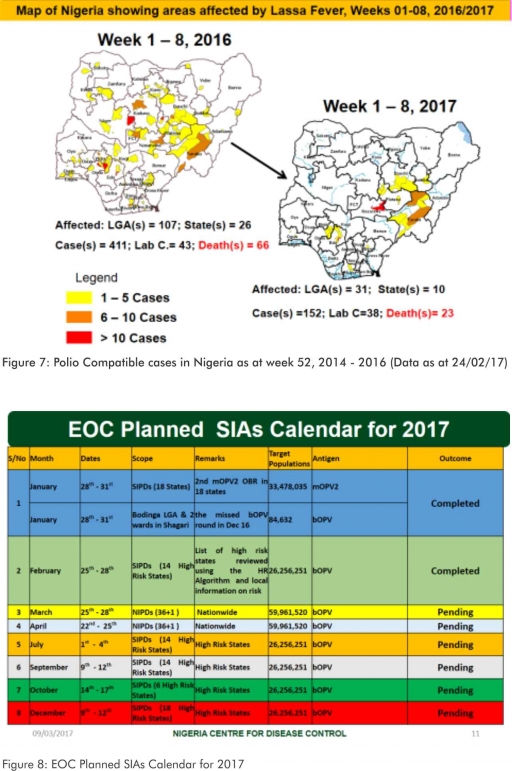 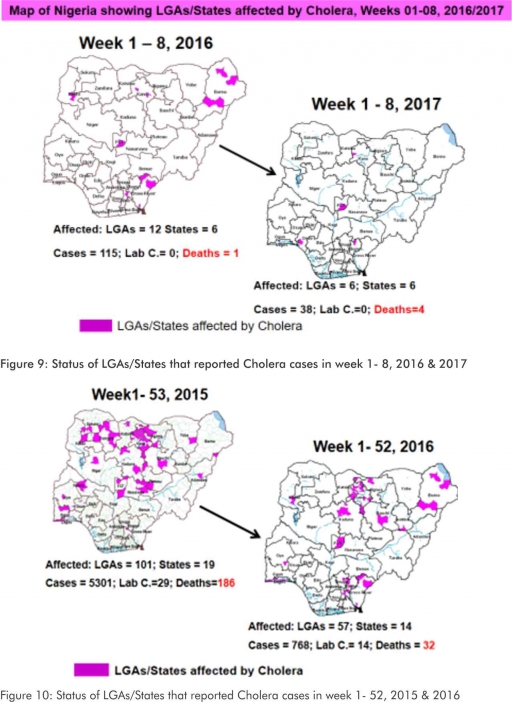 5.6. CSM surveillance evaluation to be held in first quarter of 2017 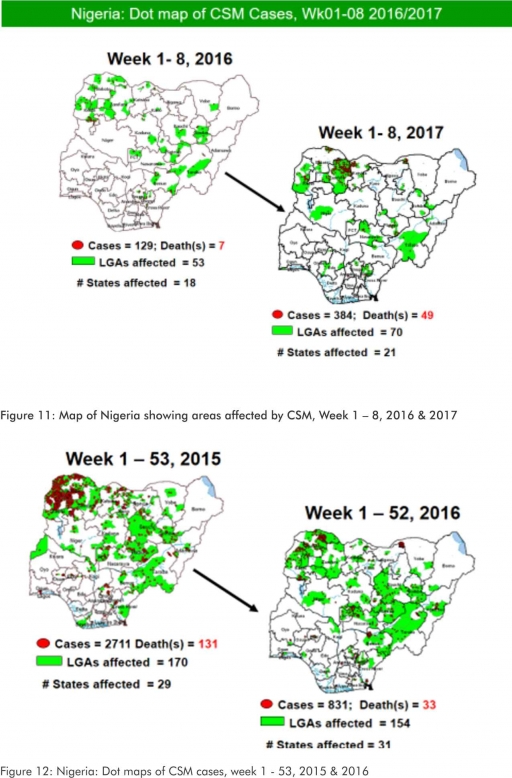 6.1. In the reporting week, No rumour reports of Guinea Worm disease was received from any State.