In 2018, Nigeria recorded a large outbreak of Lassa fever. As at the 29th of September 2019, 701 confirmed cases have been reported this year - more than the number of cases recorded in 2018. The Nigeria Centre for Disease Control (NCDC) continues to work closely with stakeholders, in improving knowledge on Lassa fever through research activities and epidemiological studies. One of these is in collaboration with the UK-Public Health Rapid Support Team (UK-PHRST) to identify other pathogens that may be causing illnesses similar to Lassa fever.

Lassa fever commonly presents with acute febrile illness. However, one critical question is “what pathogens are circulating that could be responsible for the systemic febrile illness among the over 1000 Lassa fever negative samples which met the case definition criteria for Lassa fever during the 2018 LF outbreak”?

NCDC and UK-PHRST have begun a study aimed at identifying the likely pathogen(s) circulating in Nigeria which are clinically indistinguishable from Lassa fever and responsible for significant disease burden during a Lassa fever virus outbreak. This innovation employs the use of TaqMan array card with pre-spotted single-plex real time PCR reactions with the ability to screen a single sample for up to 50 pathogens. Identified pathogens are being confirmed using MinIon sequencing. All testing and sequencing are done at the NCDC National Reference Laboratory.

When completed, one major benefit of this approach is the possibility of identifying a causative pathogen in Lassa-negative samples, which would allow recommendations and revisions of current testing algorithm. This could also lead to improved patient care, surveillance data and inform public health policy.

In addition to the contribution to science, this collaboration with UKPHRST is supporting the growth of in-country capacity for genetic sequencing in Nigeria and leadership by local experts.

Other incidents are those confirmed cases for which EOC is not activated. 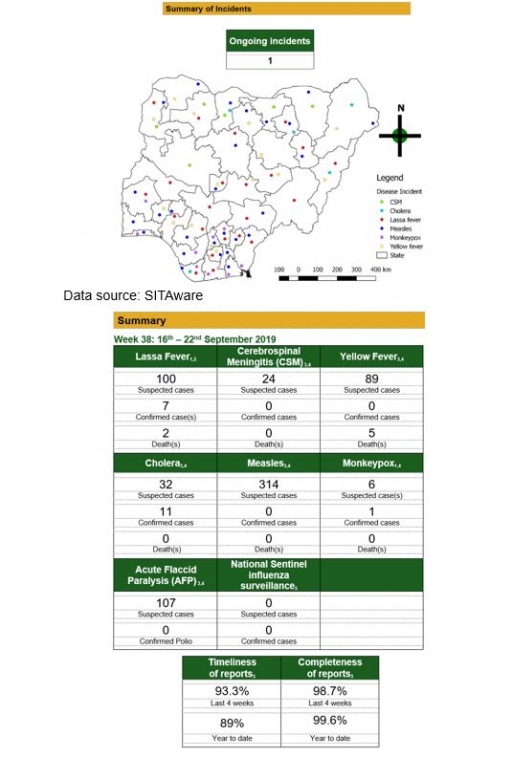 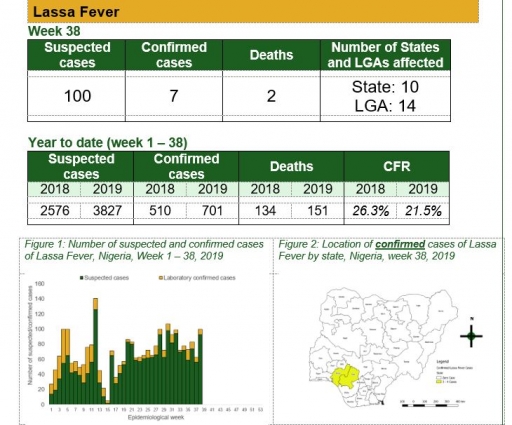 There were 24 suspected cases of Cerebrospinal Meningitis (CSM) reported from 12 LGAs in five states (Cross River – 2, Ebonyi – 2, Katsina – 18, Kebbi – 1 & Yobe – 1). None was laboratory confirmed and no death was recorded

• Establish a mechanism for getting weekly feedback from states 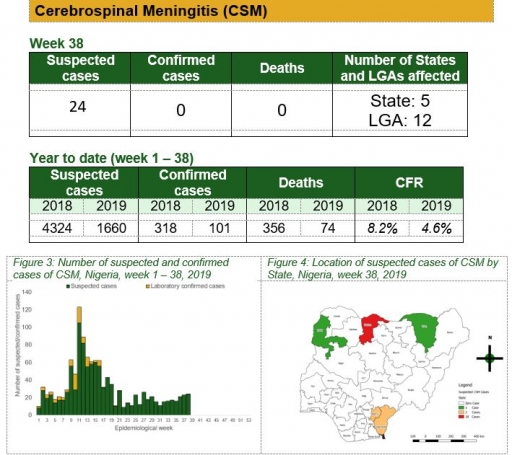 There were 89 suspected cases of Yellow Fever (YF) reported from 52 LGAs in 23 states. None was laboratory confirmed and five deaths were recorded

• Offsite support is being provided to all affected states

• Conduct preventive mass vaccination in Rivers, Ekiti and Anambra states in the fourth week of November, 2019

• Follow up with ICG request for the affected states 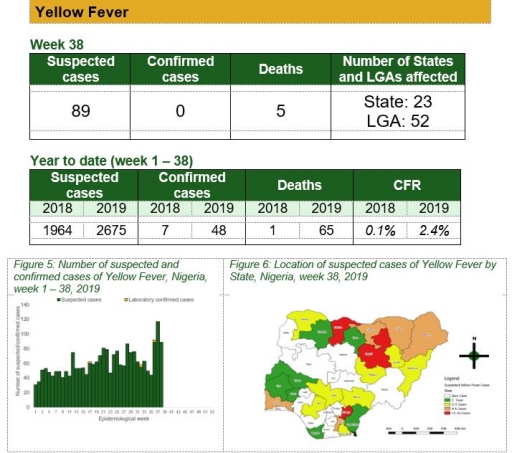 There were 32 suspected cases of Cholera reported from four LGAs in two states (Adamawa – 21 & Borno – 11). There were 11 laboratory confirmed cases and no death was recorded 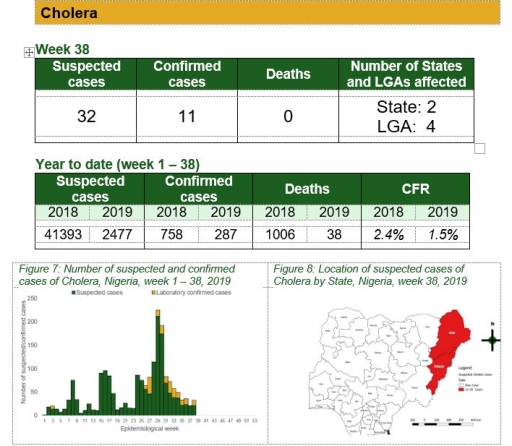 There were 314 suspected cases of measles reported from 138 LGAs in 28 states. None was laboratory confirmed and no death was recorded 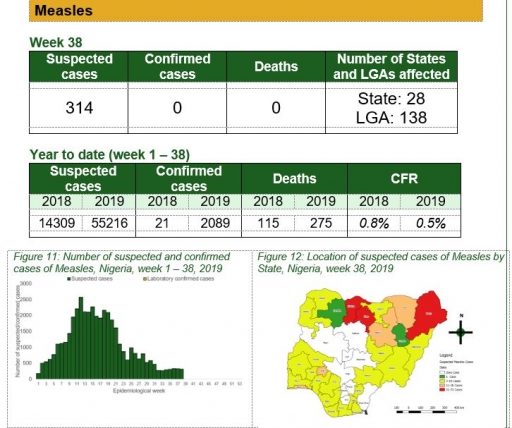 • There were six suspected cases of monkeypox reported in five LGAs in four states and FCT (Delta – 1, FCT – 1, Imo – 2, Rivers – 1 & Zamfara - 1) this week. There was one confirmed case from Rivers state and no death was recorded

• Offsite support is being provided to the affected states 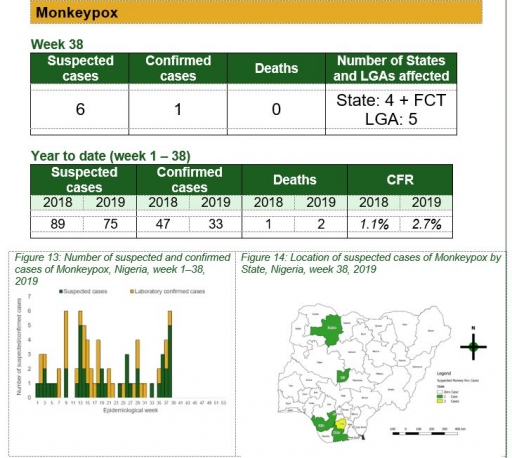 • There were 107 suspected cases of AFP reported from 98 LGAs in 30 states and FCT. None was laboratory confirmed and no death was recorded 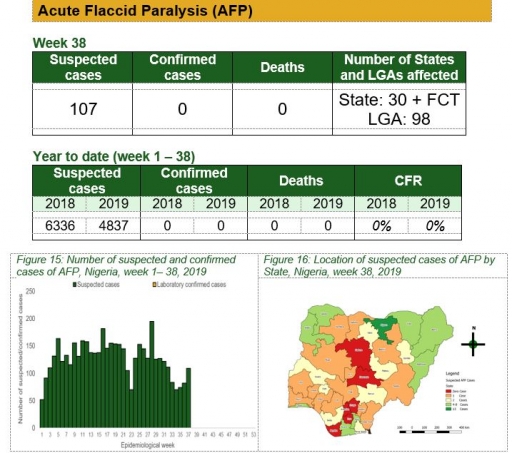 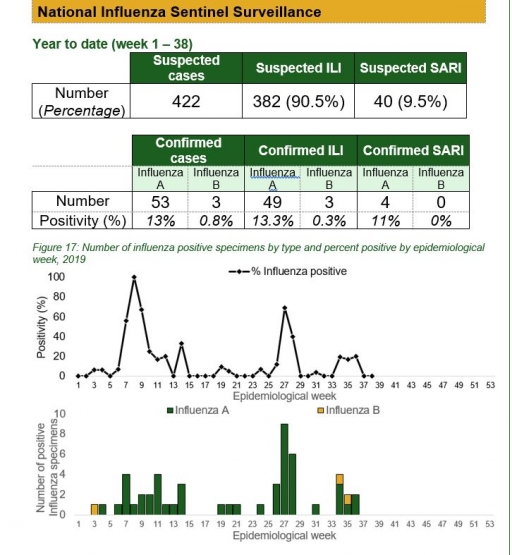 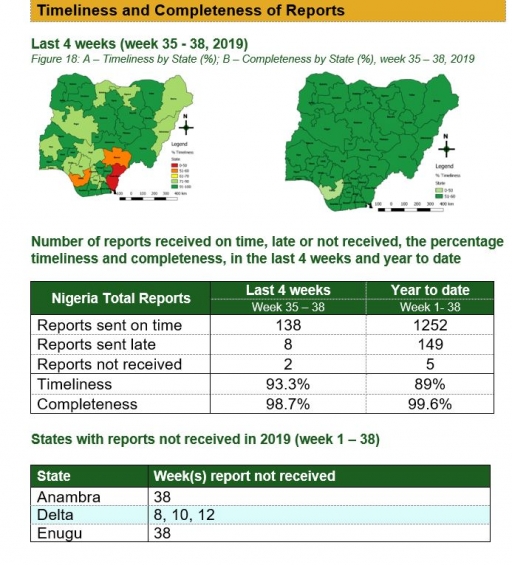 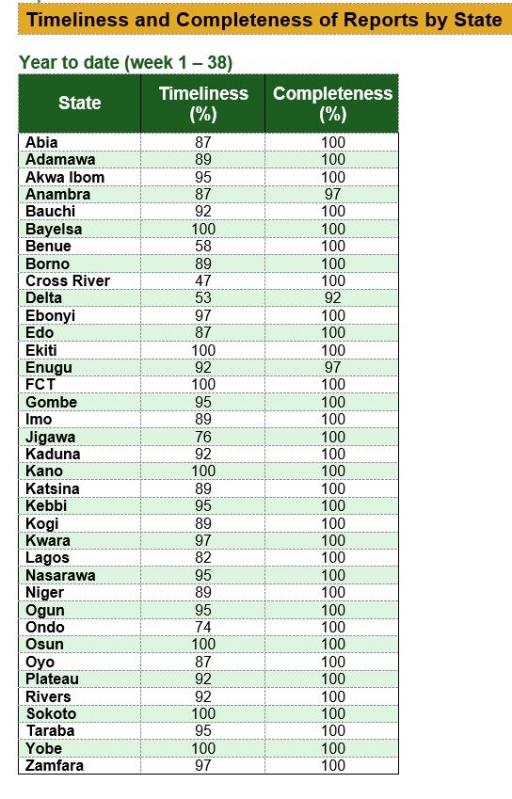