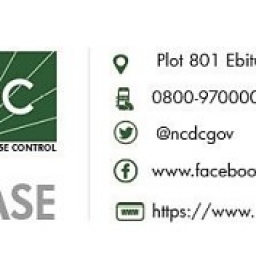 Cholera is a disease that causes acute watery diarrhoea in children and adults. While Cholera is endemic in Nigeria, there is an increase in number of cases during the rainy season, usually between April and September.

Cholera is most often spread by drinking water or eating food that has been contaminated with stools of infected persons. Food, particularly when undercooked, can be contaminated by water containing the bacteria or if it is handled by an infected person. Cholera transmission is more common in areas with overcrowding, poor sanitation and hygiene practices, and lack of clean food and water. Most people who have been infected may not show symptoms or have mild symptoms. However, the bacteria causing the disease can be shed in their faeces, leading to further spread of the disease.

Cholera is characterized by sudden onset of severe acute watery diarrhea, which can lead to death as a result of dehydration and to rapid death if not managed. Other symptoms include nausea, vomiting, weakness.

This year, there have been confirmed outbreaks of Cholera in Kwara, Zamfara, Lagos, Kebbi, Oyo, Kano and Borno States. The incidence of flooding in some areas has increased the risk for Cholera in many States as the rains continue.

To reduce the spread of Cholera, the Nigeria Centre for Disease Control (NCDC) advises that precautionary measures should be taken, and offers the following advice to Nigerians:

• Ensure all food is well cooked before consumption

• Avoid raw foods such as fruits and vegetables, except you have washed them in safe water or peeled them yourself

• Wash your hands frequently with soap and clean water. Use alcohol-based hand sanitizer if soap and water are not available

• Store boiled water in a clean and safe container

• Ensure proper disposal of waste and clearing of sewage

The Nigeria Centre for Disease Control’s Rapid Response Team has been deployed to provide support to affected States and has also supported States with the provision of cholera response kits. States are encouraged to ensure early reporting, adequate preparedness including provision of medical supplies, and institute proper case management practices.