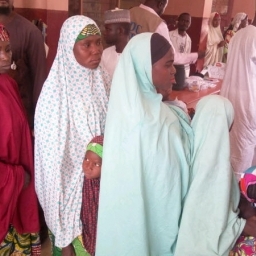 In response to the recent outbreak of Meningitis C in some States in Nigeria, the National Primary Health Care Development Agency (NPHCDA) and the Nigeria Centre for Disease Cosntrol (NCDC) in support to the Zamfara State Government, has commenced a mass vaccination exercise. The campaign started on the 6th of April 2017 in the eight most affected Local Government Areas in Zamfara State, and will continue until April 9, 2017. The campaign targets 300,000 persons aged 2 â€“ 29 years. More campaigns are planned in other States in the near future.

Reports from the field indicate early progress in the vaccination exercise. In Zamfara State, there has been a massive turnout recorded in the target Local Government Areas. The Secretary to the State Government of Zamfara and Chairman of the Zamfara State Committee for the Control of Meningitis, Prof. Abdullahi Shinkafi, is coordinating oversight of the vaccination exercise, in close collaboration with the NCDC Chief Executive Officer, Dr. Chikwe Ihekweazu, who is leading an NCDC technical team to monitor and supervise the campaign. Traditional leaders and several community groups are helping with mobilization of people across the State. According to Dr. Chikwe Ihekweazu, â€œthe commitment of the traditional rulers has been evident here; they have helped mobilize their community members for this exercise. Indeed we see an opportunity for a sustainable initiative which will go beyond this response.â€

To support effective outbreak response coordination across the entire country, the Honourable Minister of Health mandated the NCDC to activate an Emergency Operations Centre which has swung into action. The Centre is currently staffed with experts from the NCDC, NPCHDA, the Federal Ministry of Health and others from the U.S. Centers for Disease Control and Prevention, World Health Organization, UNICEF and other partner agencies. According to the Incident Manager, Dr. John Oladejo, â€œOur work here is to put in place a sustainable process for responding to the current Meningitis Outbreak. We are happy to say that this is truly a partnership focused on successfully stopping the outbreak. We will work round the clock to implement rapid response plans and deal with emerging issueâ€. He also stated that the National Assembly is aware of the work of the EOC and the NCDC and has expressed their support.

Outbreak response and control activities are ongoing in the State to curtail the outbreak.