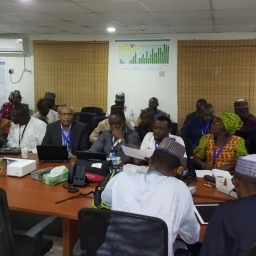 Since the insurgency in the North East of Nigeria began, millions of Nigerians have been displaced from their homes and communities, with several health workers affected. With the gradually improving security situation and increasing access to services, a health and humanitarian emergency has emerged. One of the more obvious consequences is the now well-publicized nutrition emergency. The Nigerian Government and its partners in the international community have mounted a vigorous response to this.

When there is a nutritional emergency, very few people die from poor nutrition itself. One primary cause of death in these situations, is an increased vulnerability to communicable diseases. Given that many of the health workers in Borno have been affected themselves one way or the other, it is no surprise that the ability of Borno to detect, verify and respond to infectious diseases has severely diminished. When the insurgency started, a number of affected areas in Borno were inaccessible to disease surveillance officers and in some extreme cases, these officers were displaced too. This led to a vacuum of knowledge to what was going in those communities.

As Nigeria commenced a concerted counter-insurgency operation in 2015, many communities have been freed and gradually support systems are increasingly able to access these places to provide humanitarian services in form of healthcare, nutrition, capacity building and jobs. This helped reveal the depth of suffering that was hidden for months. Two of the most apparent health consequences were striking malnutrition and the reemergence of polio in the region.

In response to the malnutrition, the Honorable Minister of Health declared a nutritional emergency in the North East. This flagged an emergency response aimed at responding to the nutritional and other health related challenges identified in Borno. As part of the response, a team led by the Nigeria Centre for Disease Control (NCDC) with support from its partners, was constituted to support Borno State in re-building its disease surveillance and response capabilities. This includes re-training on surveillance tools, supporting response activities and providing the State team with appropriate IT infrastructure for their activities.

Over the past weeks, NCDC has been working closely with the Borno State Government to rebuild their surveillance and response capabilities. From helping regain confidence of the people, to capacity building for the Disease Surveillance and Notification Officers at the State and LG levels, to revamping the reporting system and support to laboratories towards laboratory networks for early diagnosis; the goal is to set up a reliable surveillance to assure the health security of the people of Borno.

Reflecting on the security challenges of working in Borno, NCDC Team Lead, Dr. Oladejo John remarked after one of the recent explosions that went off hours after a meeting was completed, - “There are uncertainties around the job; but we must stay to support the people of Borno”.

As the Nigeria Centre for Disease Control pushes further to collect, collate and analyse data that will guide definitive action in the region, Dr. Chikwe Ihekweazu asserts the purpose of NCDC’s commitment to the task. According to him, “This is the beginning of a long process. What happened with Polio is unfortunate. What we must do is to put in place systems to prevent recurrence in the future.”