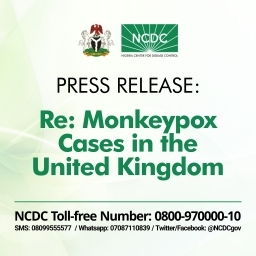 Re: Monkeypox Cases in the United Kingdom

The Nigeria Centre for Disease Control (NCDC) is aware of two confirmed cases of Monkeypox in the United Kingdom (UK), in patients with a recent travel history from Nigeria.

Since the re-emergence of Monkeypox in Nigeria in September 2017, NCDC has continued to receive reports and respond to cases of the disease from states across the country. Between September 2017 when the outbreak started and 31st of August 2018, a total of 262 suspected cases had been reported from 26 states. Of these, 113 have been confirmed in 16 states with seven deaths. The highest number of cases have been reported from states in the South-South region of Nigeria.

Following the recent report of the two cases in the UK, NCDC has been working with the UK’s public health agency; Public Health England (PHE), the public health departments in the affected states and other partners in Nigeria to investigate these cases. The NCDC has also been working closely with states across the country to strengthen surveillance, detection and response to cases of Monkeypox. A Technical Working Group coordinated by NCDC and comprising of partners from the Federal Ministry of Agriculture and Rural Development, World Health Organisation (WHO), UNICEF, US Centers for Disease Control (US CDC) and other agencies, meet weekly to ensure coordination. In addition, NCDC met with stakeholders recently, including surveillance officers and case management physicians from all affected states to review the actions taken so far and strategise on how to strengthen the country’s response.

Monkeypox is a virus that is spread primarily from animals to humans, with symptoms such as fever, headache, body pain, malaise, lymphadenopathy (enlargement of glands), sore throat and the typical generalized vesicular rash. This may last for two to four weeks. Transmission is via direct contact with infected animals, human, or contaminated materials. The virus does not spread easily between people and the risk of transmission to the wider public is very low.

Monkeypox is generally self-limiting, which means patients tend to recover in a couple of weeks. However, supportive care and management of the condition is required and mostly successful. Control measures include isolation of suspected or confirmed cases, strict adherence to universal precautions, especially frequent handwashing with soap and water and the use of personal protective equipment.

We re-assure Nigerians that NCDC has the capacity to effectively diagnose and respond to cases of Monkeypox. The National Reference Laboratory in Abuja has the capacity to test for cases of Monkeypox with a quick turn-around time. We therefore encourage any healthcare worker that suspects a case of Monkeypox, to reach out to their State Epidemiology team for appropriate action. Guidelines on the management of Monkeypox cases and outbreaks can be found on the NCDC’s website https://ncdc.gov.ng/diseases/guidelines.

The Nigeria Centre for Disease Control (NCDC) was established in the year 2011 in response to the challenges of public health emergencies and to enhance Nigeria’s preparedness and response to epidemics through prevention, detection, and control of communicable diseases. Its core mandate is to detect, investigate, prevent and control diseases of national and international public health importance.