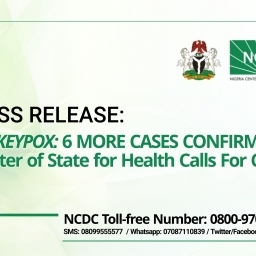 The Honourable Minister of State for Health, Dr. Osagie Ehanire has announced laboratory confirmation of six additional cases among the suspected cases for Monkeypox. These include two cases each in Bayelsa and Akwa Ibom States, one in Enugu State and one in the Federal Capital Territory. With this, there are nine confirmed cases of Monkeypox in Nigeria.

Announcing this in his office today, Dr. Ehanire noted that investigations are on-going to see if any of the new cases has a link with the Bayelsa cluster, where the outbreak started. He called for calm among members of the public, as the Nigeria Centre for Disease Control (NCDC) is working with all affected States to ensure case finding and adequate management.

He added that as frightening as the manifestation of the ailment may seem, no fatality has been recorded to date. As at the 25th of October 2017, a total of 94 suspected cases have been reported from 11 States (Akwa Ibom, Bayelsa, Cross River, Delta, Ekiti, Enugu, Imo, Lagos, Nasarawa, Niger, Rivers) and the Federal Capital Territory (FCT).

He noted that the newly confirmed cases are patients already being managed by public health authorities and have been receiving appropriate clinical care since onset of the illness.

The Federal Ministry of Health, through the NCDC, is in close contact with all State Epidemiology Teams, as well as the health facilities providing clinical care to both suspected and confirmed cases. State Commissioners of Health have been advised to place all health care facilities and Disease Surveillance and Notification Officers on alert, to ensure early case detection, reporting and effective treatment.

A National-level Emergency Operations Centre (EOC) led by the NCDC with support from our development partners, is coordinating outbreak investigation and response across affected States. The EOC includes the Federal Ministry of Agriculture and Rural Development, as well as experts from partner agencies. The EOC provides daily support to State Ministries of Health in active case finding, epidemiological investigation, contact tracing, case management, psychosocial support and risk communication.

The NCDC has also deployed Rapid Response Teams to the four States with confirmed cases. Measures have been put in place to ensure proper investigation of all reported cases, effective sample collection and testing, as well as case management of all suspected and confirmed cases. Risk communication activities have been heightened to advise the public as well as healthcare workers on preventive measures. A nationwide communications campaign has begun, to inform Nigerians of key preventive measures to take to curtail the further spread of monkeypox.

The NCDC has been working with poxvirus experts from the World Health Organization and the U.S. Centers for Disease Control and Prevention to ensure that every available step is taken to trace how this outbreak may be spreading, and in understanding the links between case clusters, in order to prevent further spread.

An Interim National Guideline for Monkeypox has been developed and disseminated to all States for coordination of response activities. This is also available via http://ncdc.gov.ng/themes/common/docs/protocols/50_1508912430.pdf.

Monkeypox is a largely self-limiting disease i.e. a disease that resolves itself. Generalised vesicular skin rashes, fever, and painful jaw swelling are characteristic symptoms associated with an infection. Although there is no specific medicine to treat the disease, when intensive supportive care is provided virtually all patients recover fully, as we have seen with the current outbreak.

Measures that can be taken to prevent infection with Monkeypox virus include avoiding contact with animals that could carry the virus such as rodents and bushmeat, especially animals that appear sick or were found dead in areas where Monkeypox occurs.

The public is advised to always wash hands with soap and water after contact with animals or, when caring for sick relatives, or managing soiled beddings.

Nigerians are once again advised to remain calm and supportive of public health authorities, avoid self-medication and report to the nearest health facility if feeling unwell or notice any of the above symptoms in anyone around you. It is important to reiterate that supportive care can be provided and full recovery is mostly the case.

Health care workers are strongly advised to take prescribed universal precautions while handling patients and/or body fluids at all times. They are also urged to be alert, be familiar with the symptoms and maintain a high index of suspicion. They are urged to adhere to guidelines stated in the Interim National Guideline for Monkeypox, and to report all suspected cases to the Local Government Area or State Disease Surveillance and Notification Officers (DSNOs).

Honourable Minister of State for Health,