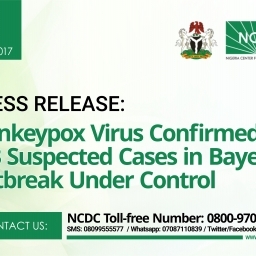 On the 22nd of September 2017, the Nigeria Centre for Disease Control (NCDC) received a report of a suspected case of Monkeypox virus disease from the Niger Delta University Teaching Hospital (NDUTH), Okolobiri, Bayelsa State. The Bayelsa State Ministry of Health initiated an outbreak investigation and response, supported by a team from NCDC, which was immediately deployed to the state.

As at 13th of October 2017, there were 17 SUSPECTED cases reported from Yenagoa LGA in Bayelsa State. We have received laboratory confirmation for Monkeypox virus from three of these cases from the WHO Regional Laboratory in Dakar, Senegal. Samples from 12 others from Bayelsa were negative, and we are awaiting two results.

With these results, the Monkeypox outbreak in Yenagoa has been confirmed with laboratory evidence. The most likely source of infection is a primary zoonotic transmission, from an animal, with secondary person-to-person transmission.

Since our initial announcement, a total of 43 other SUSPECTED cases have been reported from eight other States (Akwa Ibom, Cross River, Ekiti, Lagos, Enugu, Nasarawa, Rivers, and FCT). Of these, four cases from Lagos have also been tested and confirmed to be negative for the Monkeypox virus. We expect that many of these cases being reported from other states in Nigeria are not caused by the Monkeypox virus, but we will continue to investigate all those cases that fit the case definition.

Further laboratory tests using whole genome sequencing are being carried out by the Africa Centre for Genomics and Infectious Diseases in Redeemers University Ede, Ogun State.

Monkeypox is largely a self-limiting disease, from which all suspected patients that have been reported to date are doing well clinically. Even before this confirmation, all the necessary public health measures have been put in place and will continue to be implemented.

The Federal Ministry of Health through the Nigeria Centre for Disease Control has established an Emergency Operations Centre and will continue to co-ordinate the response across States and test samples from other cases. NCDC will also continue to support all states in their response and will keep the public informed as the situation evolves.

Measures that can be taken to prevent infection with Monkeypox virus include avoiding contact with squirrels, rats and similar animals, especially when these animals are sick or found dead in areas where the Monkeypox virus is circulating. The public is advised to always wash hands with soap and water after contact with animals or when caring for sick relatives.

Monkeypox begins with fever, headache, muscle aches, and exhaustion before the rash on face, palms and soles appears and lymph nodes swell (lymphadenopathy). The incubation period (time from infection to symptoms) for is usually 7-14 days but can range from 5-21 days.

Nigerians are advised to remain calm and supportive of public health authorities, avoid self-medication and report to the nearest health facility if feeling unwell or notice any of the above symptoms in anyone around you. It is important to note that there has been no confirmation of Monkeypox in any other part of the country, and it is likely that many of the other cases being reported are not caused by the Monkeypox virus. Nigerians should continue to be vigilant at all times.

Health care workers are strongly advised to always practice universal precautions while handling patients and/or body fluids at all times. They are also urged to be alert, be familiar with the symptoms of Monkeypox and maintain a high index of suspicion. All suspected cases should be immediately reported to the Local Government Area or State Disease Surveillance and Notification Officers.

More information on the disease can be found in the advisory note on the NCDC website: http://ncdc.gov.ng/news/106/05-october-2017-%7C-monkeypox-advisory.