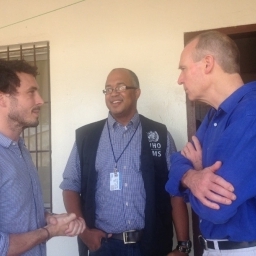 The country has built a centre, post-Ebola, to lead the prevention and response to public health threats. They have moved into a new building, assembled a team, rapidly passed the required legislative mandate and are now fully operational.

In May 2015, a few months after my experience as part of the Ebola outbreak response team in Liberia, I shared my reflections on what was a life-changing experience personally and professionally. In that piece, I emphasised my key learning from the response - the role of gaining the trust of the people that we serve, as the most important line of defence in responding to outbreaks. People only take instructions from professionals they trust.

Nearly four years after that experience, Liberia has taken several important steps to develop its public health emergency preparedness and response capacity, as well as building the trust of its citizens in the country’s health system.

In June 2018, I visited Liberia, on the invitation of the Director of the new Africa Centres for Disease Control (ACDC), Dr John Nkengasong. I was in Liberia with leaders of national public health institutes (NPHI) of Ethiopia, South Africa and a few other African countries. It was my second visit since the outbreak. This time, we had come together to discuss how we plan to share data across the African continent to enable rapid and coordinated public health action. The ACDC is playing a more prominent role in leading the coordination of NPHIs in Africa.

The choice of Liberia was an interesting one for several reasons. However, one reason that stood out, as shared by Dr Nkengasong was the progress made by the country’s new NPHI. Following the tragic Ebola outbreak of 2014/2015, Liberia has made the fastest progress in rapidly establishing a NPHI. The country has built a centre, post-Ebola, to lead the prevention and response to public health threats. They have moved into a new building, assembled a team, rapidly passed the required legislative mandate and are now fully operational. Despite limited resources, the Liberian government and its partners are leading from the front. Dr Nkengasong insisted that we all had to support Liberia! I could not agree more.

At the groundbreaking ceremony of the new Liberia NPHI by former President Ellen Johnson-Sirleaf. Photo source: U.S Embassy in Liberia

I looked back to four years ago, when I worked for the World Health Organisation (WHO), in supporting the Government of Liberia in its response to the largest outbreak of Ebola that had ever been reported. It was a difficult period – a period of intense work, when we could not shake hands or hug each other like most Africans love to do. For the three months I spent in Liberia, we worked for 10 to 12 hours daily, every single day of the week- pushing hard to ensure that the country had the data systems required to manage the outbreak. Read my piece about that period – “Every night we cried”.

During the outbreak, many data systems were built from scratch but broke down as the case count continued to grow. We did our best with the resources available, but it was clear to everyone that the best time to build a ship was not when already at sea, but beforehand! It was very obvious that to be better prepared for the future, Liberia needed a national public health institute that would bring together the skills, resources and infrastructure required to protect its citizens from a similar outbreak. A lot of credit has to go to the government of the immediate past President, Ellen Johnson Sirleaf. Madame President drove and expedited the process of establishing the NPHI and appointed its first director, who also happened to be the Incident Manager of the Ebola Outbreak response – Mr Tolbert Nyenswah.

While we were in Liberia this year, Mr Nyenswah proudly took us on a tour of the organisation he now leads. There was also an ongoing project for a building that would serve as the administrative headquarters and reference laboratory of the Liberia NPHI. In the current facility, we were introduced to the young men and women who are on the frontline of outbreak prevention, preparedness and response in Liberia. As we interacted with each of them, we saw a steely determination to take responsibility. A group of residents of the country’s new Field Epidemiology Training Programme were in the middle of a training session in the NPHI. They shared their experience with us. I beamed with pride when I realised that one of the trainers was a graduate of the Nigeria Field and Laboratory Training Programme. This is the type of regional collaboration the continent so desperately needs- where Africans can be there for other Africans.

The Liberia House of Representatives when the passage of the Act to establish the National Public Health Institute of Liberia (NPHIL) was presented on the floor. Photo credit: Front Page Africa

The experience from Liberia and the recent outbreaks of Ebola in the Democratic Republic of Congo (DRC) highlight a new and very important lesson for us in Africa. We must focus on building the capacity across the continent to develop a competent public health workforce. One that will have the technical competence, determination and integrity to lead from the front in protecting the people from threats of infectious disease.

Most countries from the USA in the West to China in the East, from the United Kingdom in Europe to Brazil in South America, as well as other countries in between, have long realised that Ministries of Health are great at what they should be doing- defining policies and allocating resources. However, to build the expertise in epidemiology, microbiology, risk communication, emergency operation management that we need to understand and respond to the threat of infectious diseases, we need technically implementing national public health institutes. Liberia has not faced any outbreak of Ebola since 2014/2015, but we all recognise that the country is better prepared than it ever has been.

The question I ask is ‘Why has it taken so long for us to come to this realisation in Africa? If Liberia, Guinea and Sierra Leone had strong national public health institutes with the capacity to detect and respond to outbreaks, unencumbered by the bureaucracy of a ministry – could we have had a smaller Ebola outbreak with fewer lives lost?’ We may never know – but Liberia has obviously decided that it does not want to take this chance in the future.

In addition to the role NPHIs play in their respective countries, now is the time to increase collaboration of these institutes in West Africa and across Africa. We now meet regularly and speak often- crafting a new and safer future for public health on the continent. It is in the spirit of this collaboration that I invited Mr Nyenswah to the third Annual NCDC/NFELTP annual conference in Abuja on the 4th – 6th of September 2018. Tolbert delivered a powerful presentation on Liberia’s growth since the Ebola outbreak and his vision for a stronger public health work force on the continent- an inspiration to many of us. We will be stronger, together