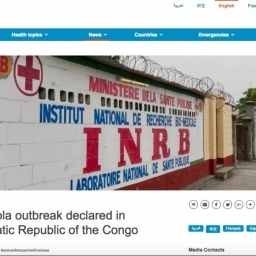 HOW PREPARED IS NIGERIA FOR ANOTHER EBOLA OUTBREAK?

After the 2014 Ebola outbreak in West Africa, a key lesson was that the preparedness and response capacity of countries requires significant investments to strengthen their health systems. In light of this, many countries have begun to set up national pu

Events in the Democratic Republic of Congo (DRC) have caught the attention of the global health community once again. An outbreak of Ebola Virus Disease (EVD) was confirmed by the DRC Government on the 8th of May 2018. This outbreak has come with real and perceived threats to local, national and global health security, with countries placed on different levels of alert by the World Health Organisation (WHO).

In Nigeria, the risk of spread has been classified as moderate by WHO, similar to all countries in Africa. The key question that has been asked by many Nigerians is â€˜how prepared are we for another outbreak of Ebola?â€™ This can be attributed to the countryâ€™s experience in 2014 when an imported case of Ebola from Liberia led to the death of eight people including four healthcare workers. The dramatic events that followed this outbreak have led to an increased awareness and risk perception by the population, about the dangers of the disease.

About four years after Nigeriaâ€™s experience in responding to this outbreak, there have been several subsequent outbreaks in the country including Lassa fever, Monkeypox, yellow fever and cholera. It is imperative therefore to review our level of preparedness and reassure Nigerians.

After the 2014 Ebola outbreak in West Africa, a key lesson was that the preparedness and response capacity of countries requires significant investments to strengthen their health systems. In light of this, many countries have begun to set up national public health institutes (NPHIs) that will focus on building the technical expertise to lead on prevention and preparedness as well as response capabilities

The Nigeria Centre for Disease Control (NCDC) was established in 2011 prior to the Ebola outbreak. However, the outbreak in 2014 was the young agencyâ€™s first experience in leading the response to a major outbreak. At the time, an ad-hoc Emergency Operations Centre had to be established and only became fully functional days into the outbreak. The Lagos University Teaching Hospital was the only laboratory in the country with the capacity to confirm cases. A Rapid Response Team had to be hastily assembled, temporary isolation centres had to be erected in strategic places and other similar â€˜ad-hoc operationsâ€™. The Ebola Virus Disease (EVD) outbreak left us with a lot of lessons- the most important being the benefit of preparedness.

Four years after, we have learnt that indeed national public health institutes have to be the focus of disease preparedness and response activities. They can and should provide leadership in disease surveillance and outbreak investigations, reference laboratory services, including specialist diagnostic services for rare organisms, and advise their governments on development and evaluation of public health interventions. This is the role NCDC now plays, creating a better health security infrastructure for Nigeria than what we had in 2014. With this, Nigeria is much safer and prepared than it has ever been.

In 2017, in line with the Global Health Security Agenda, we opened up our infrastructure and domestic resources for a Joint External Evaluation (JEE) led by the World Health Organisation. This was supported by experts from other public health institutes across the world. This peer review process highlighted several gaps and provided key recommendations towards strengthening our health system to effectively prevent, detect and respond to outbreaks and threats of public health importance. Close to a year after this process, several gaps have been closed; a stronger political commitment and a multi-sectorial workforce established, and we are in a better position than ever before to respond to outbreaks.

One key area of strength for us in the last year has been the establishment of an Incident Coordination Centre (ICC) that ensures coordination during outbreaks. On the day the DRC confirmed an Ebola Virus Disease outbreak, our ICC was immediately activated and placed on alert mode. Although there are no Ebola Virus Disease cases in Nigeria, a coordination group has been set up to mitigate the risk. This group of experts have developed and disseminated a public health advisory note to the general public reminding them of what to do to prevent an outbreak and what to do in the event of an outbreak. A letter of alert has been sent to all states in the country highlighting the key needs of human resource, a treatment/isolation centre within a tertiary health facility, enhanced surveillance especially at points of entry and communication lines. The national port health services have been put on high alert and screenings heightened at all points of entry.

Although the current outbreak in the Bikoro region of DRC is reported to have begun in April, gaps in the surveillance system meant cases were not reported on time. This is similar to our experience in Nigeria during the 2017 Cerebrospinal Meningitis outbreak which began in December but cases were not reported till January. It is in response to this that we are strengthening our surveillance system through the roll-out of digital surveillance tools such as SORMAS. This ensures real-time case-based reporting of priority diseases and diseases of public health importance. Deploying this tool in states will lead to an increased reporting and early detection by our state epidemiologists and disease surveillance and notification officers on the frontline.

There is no doubt that national public health institutes such as ours need people who are both content experts and knowledgeable of the local context. We have continuously strengthened our capacity at the national level and supported the foot soldiers- state epidemiologists and disease surveillance and notification officers at the Local Government level. Our Field Epidemiology Residents and graduates who have undergone the national training program continue to grow and are invaluable assets to the work we do. We have also begun a rollout of Lassa fever case management training across the country and developed a module for infection prevention and control training. Human resource for health remains one of our biggest strengths.

Gradually, we are building an even stronger multi-sectorial workforce to prevent, detect and respond to outbreaks of infectious diseases in Nigeria, guided by the One Health approach.

Our agency continues to go through several changes which we term growth phases. From the legislative backing to progress across key pillars of surveillance, detection, preparedness and response, we are definitely better prepared as a country to prevent and if necessary, respond to another outbreak of Ebola Virus Disease.

Dr. Chikwe Ihekweazu is an infectious disease epidemiologist and Chief Executive Officer of the Nigeria Centre for Disease Control.