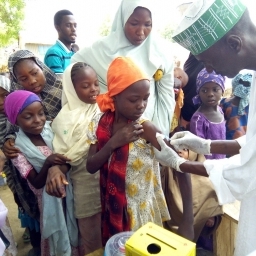 2017: A year like never before for Infectious Disease Outbreaks in Nigeria Dr Chikwe Ihekweazu

For each of these outbreaks, we set up an Emergency Operations Centre that our teams worked round the clock- extra hours and often through the weekends. We deployed Rapid Response Teams who travelled at odd hours and over very long distances to better und

In the year 2017, like never before, Nigeria was faced with several outbreaks - Cerebrospinal Meningitis, Lassa fever, Yellow fever, Cholera and most recently Monkeypox. There was definitely no quiet period for the Nigeria Centre for Disease Control (NCDC) - the national public health agency with the responsibility of preventing, detecting and responding to disease outbreaks. From one outbreak into another, this young agency continued to work to respond and protect the country, round the clock while at the same time strengthening its own capacity to effectively protect the health of Nigerians.

An outbreak of Cerebrospinal Meningitis, which had begun in December 2016 in Zamfara State, was not reported to the national level until two months into the outbreak. By this time, the number of reported cases began to escalate rapidly, and the situation was not looking good: hundreds of new cases of meningitis were being reported weekly through the NCDC surveillance systems. The NCDC led a multi-partner team to control this outbreak, which was ultimately achieved, though not without the loss of over 1,000 lives. The sheer number of deaths strengthened our resolve to improve our prevention and response capabilities, working with partners and stakeholders. We knew then that the current state of affairs had to change, the existing procedures/protocols for detecting and reporting disease outbreaks at the state level were not working optimally. The challenge that we faced also became clearer than ever, we are dependent on a workforce at the state and Local Government Area (LGA) level over whom we had no direct control.

Just as we begun to record a decline in the number of cases of Meningitis, an outbreak of Cholera hit some states in the country - spreading quickly. The climax of this outbreak was in Borno State, where the insurgency had disrupted potable water supply, resulting in challenging hygiene and living conditions. For the first time in the country, an oral cholera vaccination campaign was implemented in a joint effort led by the Borno State Government and the National Primary Healthcare Development Agency (NPHCDA). A visit to Borno State including Cholera treatment centres located mostly at Internally Displaced People (IDP) camps further highlighted the critical need for a stronger response and the strength of partnerships. Unlike the Meningitis outbreak where we had a shaky start, we had held a Cholera outbreak preparedness meeting with high priority states and stakeholders, developed a preparedness plan, begun an awareness campaign before the rainy season and proactively sent out letters of alerts and other communication with states. This definitely put us in a better position to respond to outbreaks. But, we knew that outbreak preparedness is not an event but a cycle.

In September 2017, an unusual outbreak emerged; Nigeria faced an outbreak of Monkeypox. This disease had not been detected in Nigeria since the seventies. Further investigations showed that it may actually have been circulating in Nigeria for some time, but could have been under-reported or misdiagnosed in recent years. Our investigations are continuing to unravel its origins. This outbreak highlights the structures the NCDC has put in place to strengthen its surveillance system - including an event-based surveillance system and its diagnostic capacity, essential ingredients in outbreak detection.

The last large outbreak of Yellow fever in Nigeria is reported to have occurred over thirty years ago. In 2017, investigations into news reports of â€˜strange illnesses and deathsâ€™ in Kwara and Kogi State revealed the re-emergence of Yellow fever. Given the very low immunisation coverage rates in many parts of the country, this was not surprising. When the reports came in from these two States, we actively set up an Emergency Operations Centre at the national level, placed an alert to all States, sent teams to states to investigate, placed our Field Epidemiologists in training on alert and by the end of December 2017, four States had reported confirmed cases. Our sister agency, NPHCDA led a reactive vaccination campaign in Kwara and Kogi State and a nationwide vaccination campaign is planned for 2018.

In previous years, suspected Lassa fever cases were reported mainly during the dry season. This year, however, the trend did not show this pattern, rather we saw an all-year-round reporting of suspected Lassa fever cases. The continuing reporting of cases even with the onset of the rainy season unlike in previous years suggests either an evolving epidemiology of Lassa fever in the country or improved detection following intense public awareness campaigns that were initiated. Despite this, however, a decrease in the case fatality ratio was recorded when compared to previous years - indicating that we are getting better at managing cases. This improvement in case fatality is due mainly to the increasing expertise at the Irrua Specialist Teaching Hospital in Edo State, which manages by far the largest number of Lassa fever cases in the world.

For each of these outbreaks, we set up an Emergency Operations Centre that our teams worked round the clock- extra hours and often through the weekends. We deployed Rapid Response Teams who travelled at odd hours and over very long distances to better understand the situation and to support the states. Our communications lines were kept open and despite the challenges we faced, we published weekly situation reports. The prepositioning and distribution of medicines, personal protective equipment, consumables, laboratory reagents and other medical supplies to the different states across the country was also a key part of our work, to ensure preparedness and to support response activities.

The response to these outbreaks highlighted opportunities for improvements in the work we do: from our surveillance systems to our laboratory architecture and other critical areas. In June 2017, Nigeria became one of 52 countries globally and the 15th in Africa to carry out a Joint External Evaluation (JEE) of its International Health Regulations (IHR 2005) capacities. The JEE process which is led by the WHO and other external partners, using a peer-review mechanism, was coordinated by the NCDC Surveillance and Epidemiology Directorate which also serves as the IHR desk for the country. This evaluation provided an opportunity for us as a country to identify the most urgent priorities and opportunities to strengthen our health security through a transparent process. It also brought together several internal partners with joint responsibilities on health security matters. The output from the assessment will help stakeholders across the relevant roles in Nigeria to develop a plan, which prioritises activities needed for improving the countryâ€™s IHR capabilities as well as enhancing its health security. This is one of the NCDCâ€™s top priorities for the 2018 and plans are underway for implementation.

Operationalising the National Public Health Reference Laboratory (NPHRL) in Gaduwa, Abuja was a major focus of the new leadership of the NCDC and on the 13th of May 2017, the first test was carried out at the NPHRL. Currently, our national laboratory has the capacity to confirm Monkeypox, Meningitis, Avian Influenza, Cholera, Lassa fever, Yellow fever and is building its capacity to test for all other endemic prone diseases in Nigeria.

In addition, we established an Incident Coordination Centre within the NCDC- this serves as the hub of alert and response operations combining information and communications technologies to inform decision-making for effective investigation and response activities. We are constantly monitoring, detecting, responding and following up. As many Nigerians went on Christmas holiday this December, three different Rapid Response Teams were deployed to Zamfara, Nassarawa and Kano States - supporting the states in responding to an outbreak of Meningitis in Zamfara, and Cholera in Nassarawa and Kano State. Our service to the country continues.

The increasing confidence, cooperation and support of our leaders, local and international stakeholders and partners has been critical to progress we have made over the last year. The approval of the NCDC Bill as an Executive Bill by the Federal Executive Council and its passage through first and second reading at the National Assembly gives us confidence that the country appreciates our work.

Our vision is to earn the confidence of Nigerians and the global community in our mandate to protect the health of all those living in Nigeria through timely surveillance and an effective response. We stand ready to take on this task, working in partnership with the Nigerian people, while assuring our resolve to strengthen our role and contribution towards improving public health in Nigeria. The year 2017 taught us a lot of lessons and we realise 2018 will not be any easier, but we are ready for the challenge.