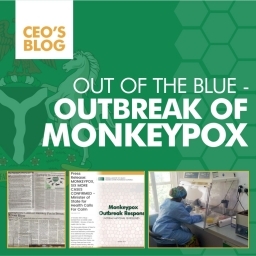 Out of the Blue - AN OUTBREAK OF MONKEYPOX

Interestingly, Monkeypox was not one of the priority diseases as no case had been seen in years. This brings to bear the fact that the work we do at the NCDC, can be extremely unpredictable and requires broad based expertise and constant preparedness.

Out of the Blue- AN OUTBREAK OF MONKEYPOX

On the 22nd of September 2017, we received a report from the Bayelsa State Ministry of Health of a suspected case of Monkeypox. This was a different alert compared to other alerts the Nigeria Centre for Disease Control (NCDC) had responded to since its establishment in 2011. This was an outbreak of a disease that had not been seen in Nigeria in almost thirty years. (Photo 1 - Newspaper clips reporting the Monkeypox outbreak)

Our Rapid Response Team (RRT) was deployed immediately to the state to investigate this outbreak, supporting the development of an isolation centre, carrying out case finding and increasing awareness in the community. The Bayelsa State government announced the outbreak through a press release on the 5th of October 2017, and this immediately elicited various reactions on electronic, print and social media. The NCDC quickly came under criticism and there was a great deal of panic in the country. What the people did not know, was that the NCDC had spent the previous two weeks in Bayelsa supporting the state government in its response. We immediately activated a National Emergency Operations Centre (EOC) to coordinate the response, bringing in colleagues from the Federal Ministry of Agriculture and Rural Development, World Health Organisation (WHO), U.S Centers for Disease Control and Prevention (US CDC), African Field Epidemiology Network (AFENET), University of Maryland Baltimore (UMB) and of course our Field Epidemiology Residents. Despite the challenges, we were on top of events.

Prior to the current Monkeypox outbreak, we had held a workshop in July 2017 as part of our activities to strengthen the One Health approach to disease outbreaks in Nigeria. This was an intensive process of reviewing the literature, previous outbreak response activities and other protocol available to us. During that workshop with stakeholders and experts, which also included academia, the NCDC prioritised 40 different priority diseases with a potential to be transmitted to humans by animals (zoonotic diseases) to focus on. Interestingly, Monkeypox was not one of the priority diseases as no case had been seen in years. This brings to bear the fact that the work we do at the NCDC, can be extremely unpredictable and requires broad based expertise and constant preparedness. We continue to improve our level of preparedness but will be unable to completely predict the transmission of emerging and re-emerging viruses and other pathogens. (Photo 2 - Stakeholders at the One Health Prioritisation workshop during the NCDC/NFELTP Conference in July 2017)

Following the announcement of the outbreak in Bayelsa, we strengthened our disease surveillance activities, including media monitoring for the disease in other states in the country. Our team sent out letters of alert and diagnostic protocols to every state highlighting what to look out for, what to do and where to go. Within two weeks, we received several rumours and reports of suspected cases from various states in the country. With the heightened attention, there was panic. We interacted with the media on several occasions, to re-assure the public, as well as to advise them on what to do. Some of these suspected cases turned out to be Chickenpox, and other skin infections, but a few were confirmed as Monkeypox. Within two weeks, following the confirmation of the first case of Monkeypox, the NCDC had developed the first set of Interim Guidelines for Monkeypox and had circulated it, also making it available on the NCDC website in record time. This happened with a lot of support from our colleagues at the US CDC, to whom we are very grateful. These guidelines have ensured a harmonised approach to detect, respond and report cases of Monkeypox. (Photo 3 - Open communication lines. Regular press releases, situation reports and development of Monkeypox guidelines)

One major public backlash to our response, was that samples had to be sent abroad for the primary diagnosis. In the last year, the NCDC has dedicated time, effort and resources to developing the NCDC National Reference Laboratory (NRL) in Gaduwa, FCT. The diagnosis of the first set of cases, were carried out at the WHO Reference Laboratory in Dakar, Senegal. With support from the US CDC, following training and acquisition of reagents, our NRL now has the capacity to test for Monkeypox. Colleagues in our lab team spent hours being trained, collecting samples during the day and at night, and ensuring a quick turnaround time. The Central Public Health Laboratory, which is a campus of the NRL also played a key role in sample collection and transportation. (Photo 4 - Testing for Monkeypox at the NCDC National Reference Laboratory)

Colleagues working in the EOC spent the entire day reviewing reports from States, ensuring samples were collected and tested, that proper case investigation took place, monitoring media activities and developing Situation Reports. Just like every outbreak, the NCDC has responded to in the last year, we have ensured Nigerians are kept up to date by releasing weekly situation reports on our website. We developed communication materials and shared this widely, our connect centre was kept very busy and remained responsive, and we attended as many television and radio interviews as possible. We recognised the power of the media as always, and remain grateful for the support received.

Responding to the Monkeypox outbreak has taught my team and I some significant lessons. We built a strong response structure within days of the initial outbreak, we strengthened our laboratory structure, we improved our media monitoring activities and overall strengthened our capacity to protect the health of Nigerians. This did not come without sacrifices that the NCDC was not proud to give for our country. The outbreak is now in decline and the lessons have not stopped. One step stronger every day!