The severity of the ongoing Cerebro-spinal meningitis outbreak has gradually reduced in the last few weeks, with fewer cases being reported. As at 30th May, 2017, the number of affected LGAs still remains 230 in 25 affected states, including the Federal Capital Territory. Total number of suspected cases reported so far is 14,473. Of this, 998 samples have been tested. 460 (46.6%) of the samples tested have been confirmed positive for Neisseria meningitides and 80.6% (371) have been positive for Neisseria meningitides serogroup C. The total number of deaths recorded so far is 1,155 with a case fatality rate (CFR) of 8%.

As the outbreak declines gradually, it is important that every State, affected or not, reviews lessons from preparedness and response activities during the outbreak. Conducting reviews will provide insight into levels reached for preparedness, details of outbreak response, identify gaps and areas that need to be strengthened, identify areas of collaboration and support the evaluation of systems. Reports from this can be channelled into preparedness plans for the next outbreak season.

The 2016/2017 CSM outbreak season was peculiar, given the number of suspected cases reported and the strain of the causative organism, which had never been reported before. Furthermore, the outbreak was caused by multiple serogroups with about 20% of confirmed cases caused by other serogroups besides Neisseria meningitides serogroup C. All these tested our preparedness levels and response systems at the Local, State and National Levels.

Lessons to be learnt from this outbreak cuts across all thematic areas in outbreak response.

1. Coordination: Development of Preparedness plans for disease outbreaks which should also be used as a tool for advocating for resource allocation. Constitution of Rapid Response Teams (RRTs); Early engagement of key stakeholders and partners with leadership from the State Government.

2. Surveillance: Improvement in the surveillance systems starting from the health facility level to the National for immediate case detection, notification and subsequent investigation; Improved data management systems at all levels; Improve bio surveillance activities for rumour capturing and verification; Capacity building for healthcare workers and disease surveillance and notification officers.

5. Logistics; Early forecast of outbreak commodities, Mapping and Pre-positioning of commodities in States, LGAs or Wards based on data review of previous outbreaks

6. Risk Communication: Early community sensitization and mobilization in States and at the National level, Early engagement of the mass media for sensitization programs and extended use of diverse communication tools

Disease-specific outbreak reviews should be a routine activity following an outbreak as it provides guidance on improvement opportunities and next steps to take. The Nigeria Centre for Disease Control (NCDC) will continue to support and collaborate with States as they plan to prepare for subsequent seasons of CSM outbreaks, and indeed, other outbreaks and events of public health concern. It is expected that States take ownership of outbreak preparedness and ensure that all efforts put into preparedness translate to meaningful action for response.

o There were 250 new cases of Acute Flaccid Paralysis (AFP) reported. None was confirmed as Polio. The last reported case of Polio in Nigeria was in August 2016. Active case search for AFP is being intensified as Nigeria has assiduously reinvigorated its efforts at eradicating Polio.

o Two suspected cases of Cholera were reported from Kaduna South LGA in Kaduna State and no death was recorded.

o There were 49 suspected cases of Cerebrospinal Meningitis (CSM) reported from 23 LGAs in 13 States. Of these, seven were laboratory confirmed and two deaths were recorded. Ongoing surveillance for CSM has been intensified in the States.

o There were 386 suspected cases of Measles reported from 27 States. None was laboratory confirmed and four deaths were recorded. 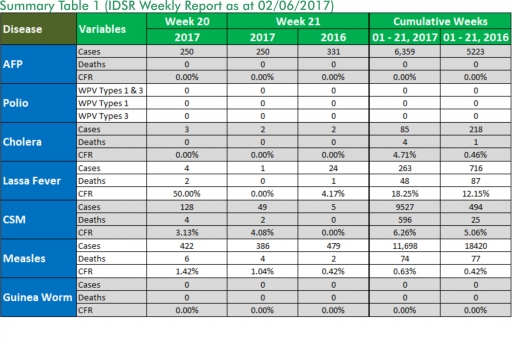 1.1. One suspected case of Lassa fever was reported from Abeokuta South LGAs (Ogun States) in week 21, 2017 compared with 24 suspected cases with one Lab. Confirmed and one death (CFR, 4.2%) from Esan Central LGA (Edo State) at the same period in 2016.

1.2. Laboratory results of the one suspected case was negative (Ogun â€“ 1).

1.5. Investigation and active case search ongoing in affected States with coordination of response activities by the NCDC with support from partners.

1.5.5. Ongoing review of the variables for case-based surveillance for VHF

1.5.6. VHF case-based forms completed by affected States are being entered into the new VHF management system. This system allows for the creation of a VHF database for the country.

1.5.8. Confirmed cases are being treated at identified treatment/isolation centres across the States with Ribavirin and necessary supportive management also instituted

1.5.9. Onsite support was earlier provided to Ogun, Nasarawa, Taraba, Ondo and Borno States by the NCDC and partners

1.5.10. Offsite support provided by NCDC/partners in all affected States 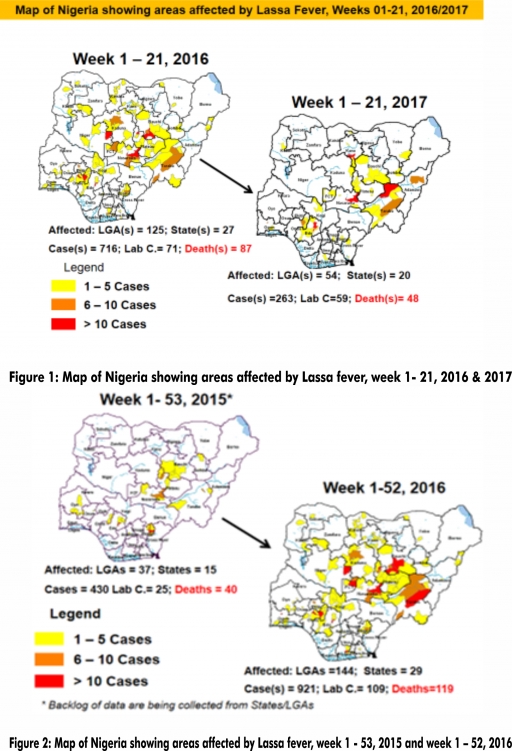 3.2.2. AFP Surveillance has been enhanced and outbreak response is on-going in Borno and other high risk States 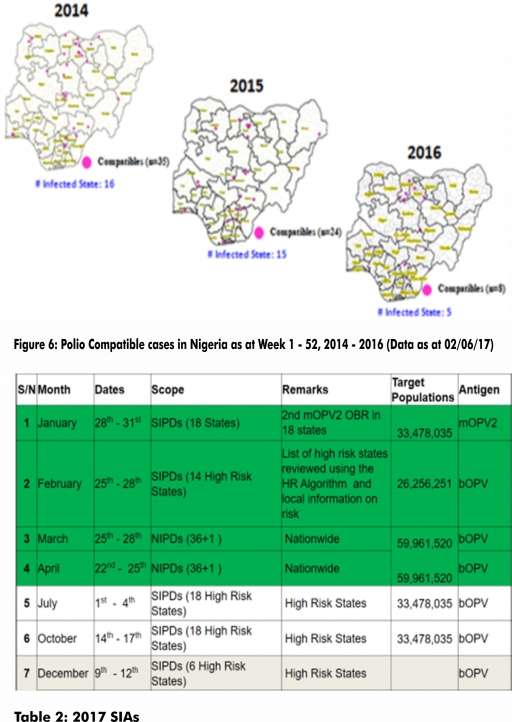 develop Cholera preparedness plan as the season set in.

4.5. States are enjoined to intensify surveillance. 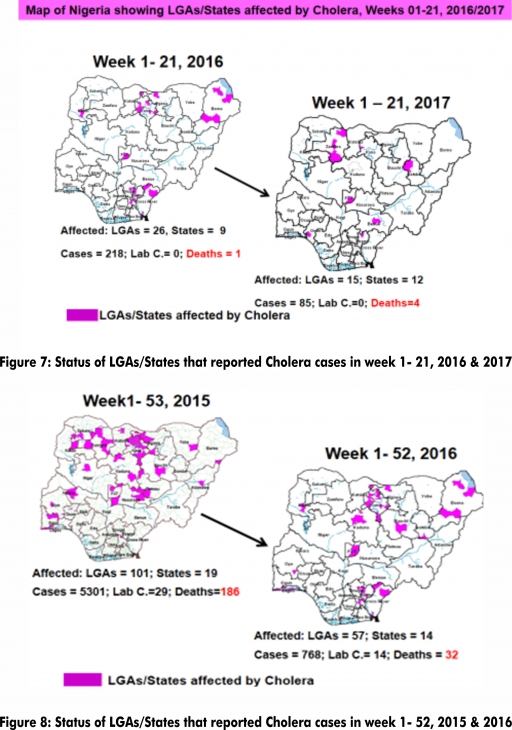 5.14. Reactive vaccination campaign completed in Yobe State and the second phase of the campaign in Zamfara State also completed.

5.15. Training and deployment of first batch of medical teams to support case management in Sokoto and Zamfara States completed (from Friday 5th - 26th May, 2017).

5.17. Team deployed by NCDC/WHO to support surveillance activities, laboratory data harmonization and monitoring of the implementation plan in Yobe state completed their assessment. 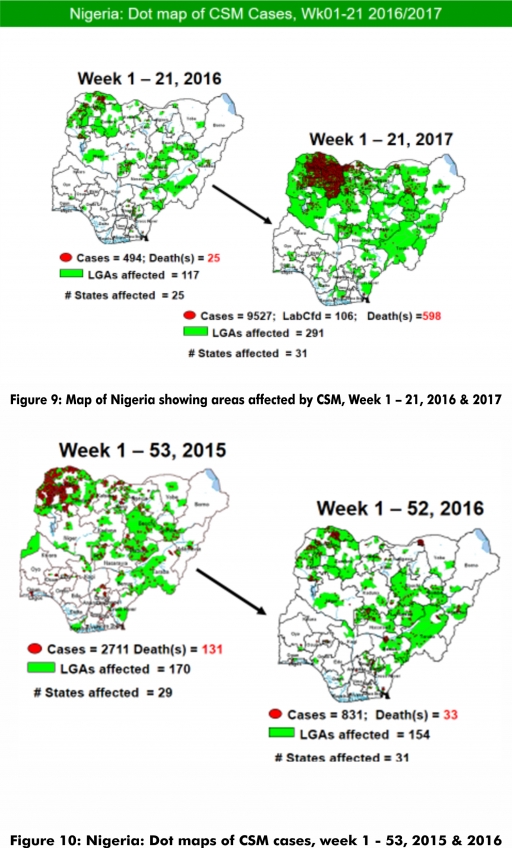 6.1. In the reporting week, no rumour report of Guinea Worm disease was received from any State.

6.2. Nigeria has celebrated eight consecutive years of zero reporting of Guinea worm disease in the country. The Country has been officially certified free of Dracunculiasis transmission by the International Commission for the Certification of Dracunculiasis Eradication (ICCDE).