State Epidemiologists and Local Government Disease Surveillance and Notification Officers (DSNOs) play critical roles as the frontline soldiers for epidemic intelligence and emergency response in Nigeria. As part of our mandate, NCDC supports the training and capacity building of this workforce. Over the last few years, surveillance training opportunities have been provided in different states by various partners and NCDC. Following a review of this training approach, NCDC is introducing the Integrated Training of Surveillance officers in Nigeria (ITSON).

The ITSON is a single harmonised package for more robust and effective training of surveillance officers at state and LGA levels in Nigeria. To kickstart ITSON, NCDC is utilising funds from the World Bank Regional Disease Surveillance Enhancement System (REDISSE) project.

An important step towards the development of this package is an ongoing needs assessment through advocacy visits by officers from NCDC supported by counterparts from World Health Organisation (WHO) and African Field Epidemiology Network (AFENET) to the 36 states in Nigeria. The objectives of the assessment are to:

1. Conduct advocacy to the State Ministry of Health before the training and understand the structure and supervisory MDA for surveillance in the State

2. Identify the trainings gaps, training needs and peculiarities of each State

3. Determine the availability and functionality of laptop computers and other surveillance tools required for effective reporting in all the LGAs and States of the federation

4. Advocate for better conditions of service, greater consistency and longevity in post for the DSNOs after the training in order to ensure institutionalization of the investments in training

5. Agree with the state on the basic competencies required for the DSNOs to be nominated for the training

The expected outcomes from the assessment are that the State Ministry of Health is better informed of the project, and provides better ownership to ensure sustainability.

When completed, it is expected that the ITSON package will contribute significantly to bridging knowledge gaps among the state epidemiologists and DSNOs across the country.

• A Rapid Response Team (RRT) has been deployed to Benue state 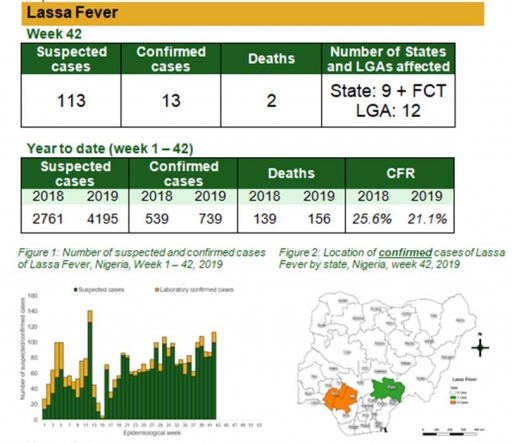 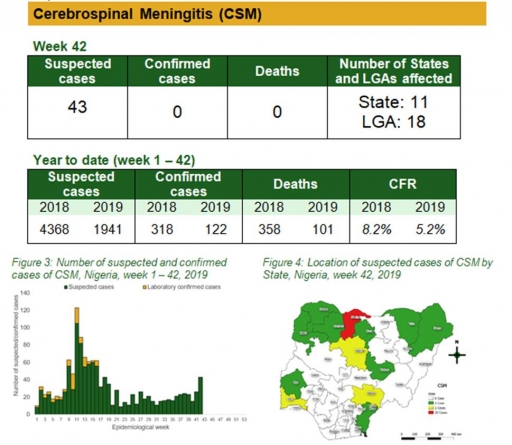 There were 118 suspected cases of Yellow Fever (YF) reported from 64 LGAs in 24 states and FCT. There were five laboratory confirmed cases and no death was recorded 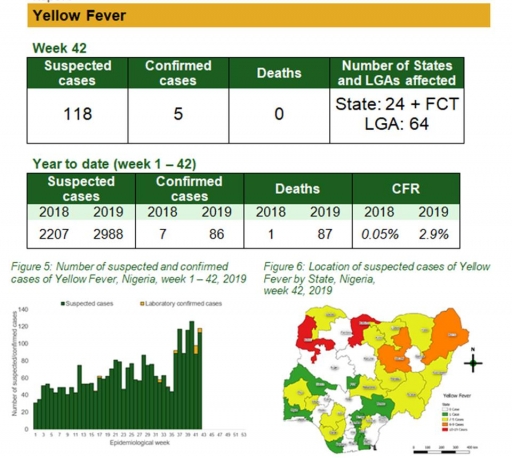 • There were 23 suspected cases of cholera reported from five LGAs in three states (Abia – 1, Adamawa – 11 & Borno – 11). There were ten laboratory confirmed cases and no death was recorded 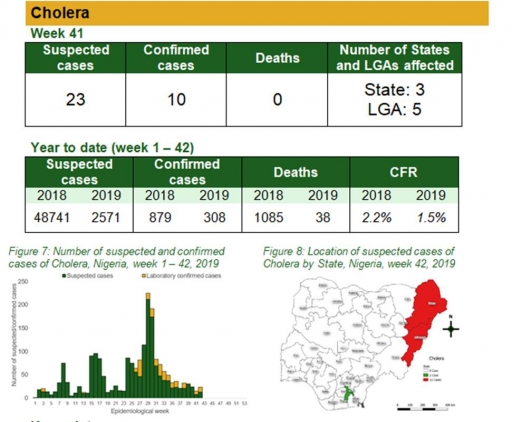 • There were 378 suspected cases of measles reported from 137 LGAs in 31 states and FCT. None was laboratory confirmed and no death was recorded 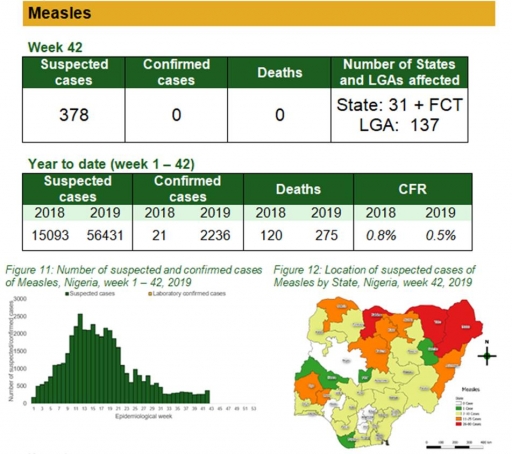 • There were three suspected cases of monkeypox reported from two LGAs in two states (Akwa Ibom – 2 & Bayelsa - 1). There was one laboratory confirmed (Bayelsa) and no death was recorded

• The national monkeypox TWG is monitoring activities in all states

• Follow up with the laboratory and Tranex for prompt sample delivery 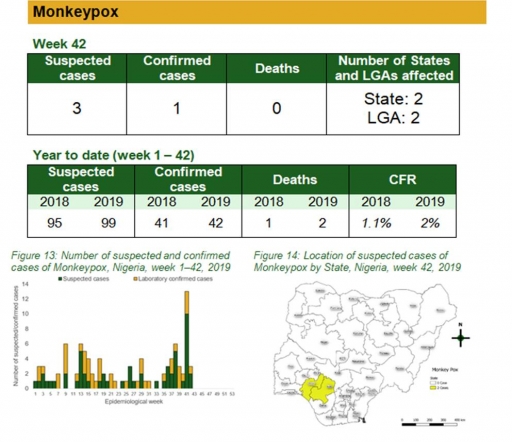 • There were 113 suspected cases of AFP reported from 98 LGAs in 32 states and FCT. None was laboratory confirmed and no death was recorded 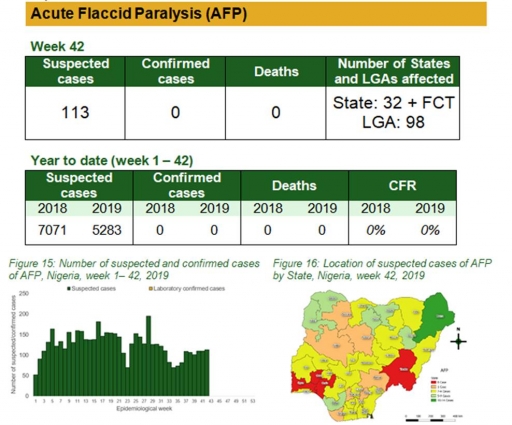 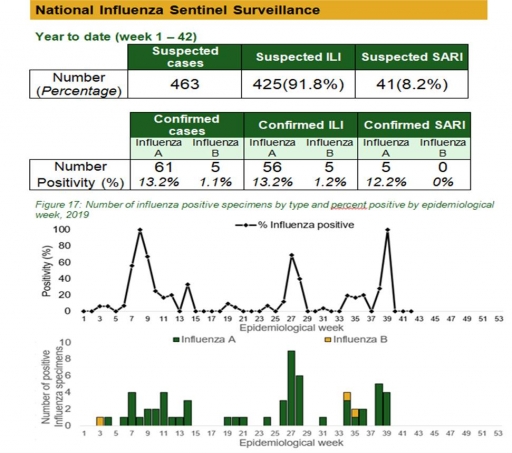 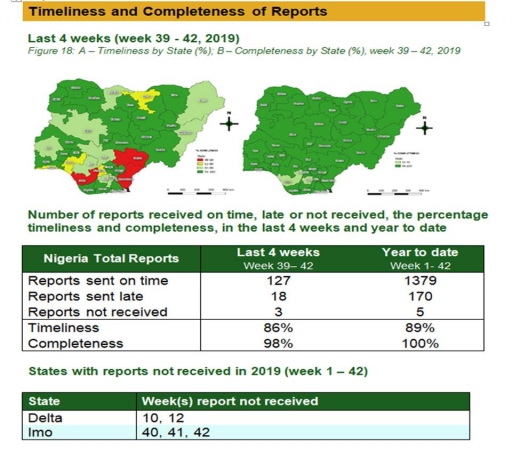 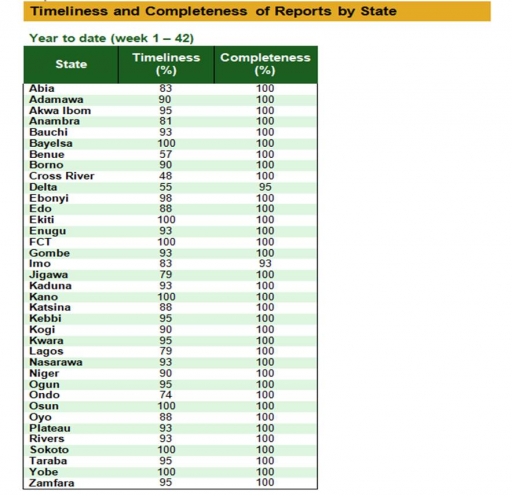